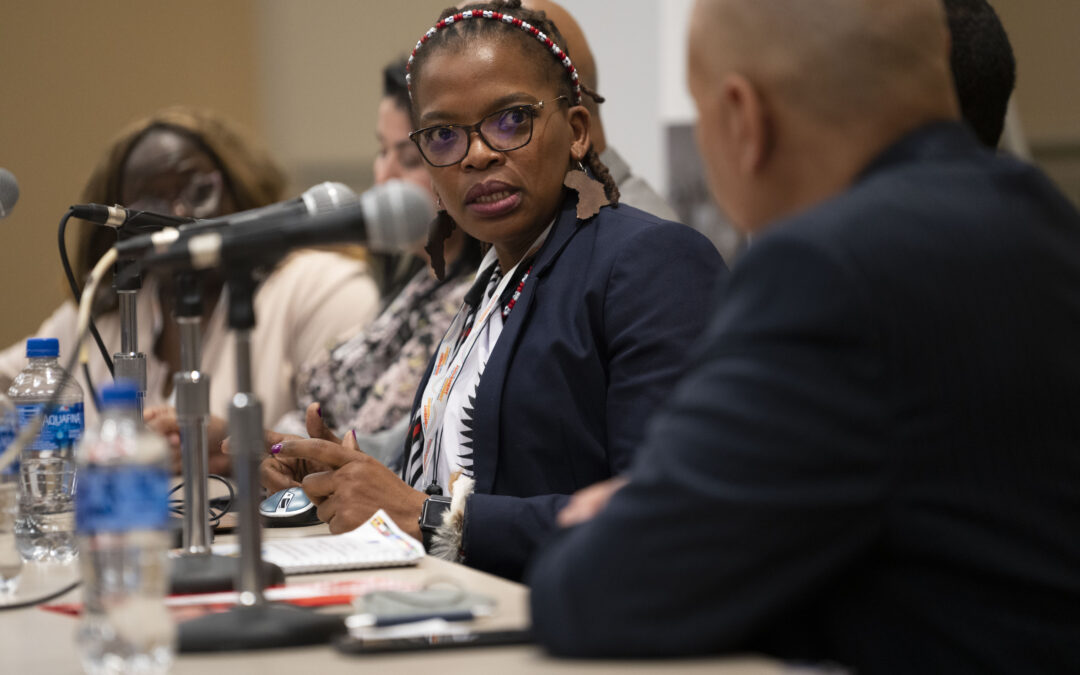 COSATU President Zingiswa Losi was among speakers at a global side event during the AFL-CIO Convention. Credit: Jay Mallin

The Global Organizing Symposium, a daylong side event of the AFL-CIO Convention, brought together workers and activists from around the world to share experiences focused on building collective power for workers post-pandemic and highlighted their role in fighting authoritarianism and bolstering democracy. Sessions focused on platform worker rights, clean-energy models that both address climate change and work for workers and building an inclusive movement for gender and racial equality.

In the first session, panelists shared how gig workers in the platform economy are organizing globally to create decent work in a sector notorious for low-balling pay and denying rights and benefits.

As the pandemic took hold two years ago, app-based delivery workers in Mexico—like their counterparts around the world—encountered increasingly dangerous working conditions. When one worker was killed on the job and the company did nothing, they knew the only way to protect themselves and their livelihoods was to join in common cause.

The workers formed a colectivo they called Ni Un Repartidor Menos (Not One Delivery Worker Less) to address egregious and life-threatening job hazards, among them sexual harassment, violence, injuries fatal and less so, as well as unfair laws that have levied onerous taxes on wages and for the use of infrastructure, like sidewalks.

Saúl Gómez, founder of Ni Un Repartidor Menos, told a gathering of almost 300 union activists convened ahead of the AFL-CIO Convention for the Global Organizing Symposium last weekend that the app company cares little about the workers, and customers can act with impunity toward delivery people. Women workers, in particular, face inappropriate behavior and additional safety risks. For example, Gómez said it was not unusual for naked customers to receive deliveries. Even worse: One woman worker delivering to a residence in one of Mexico City’s toniest neighborhoods, Polanco, was held captive by the customer for nearly a week.

The customer suffered no consequences. The worker was fired when the company removed her from the app. 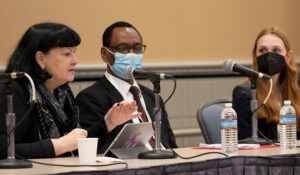 Speakers pointed to the erosion of democracy in their country and ways the labor movement is working to turn the tide. Nowhere is the conflict between authoritarianism and freedom more in the spotlight than Ukraine.

“We are paying a big price for independence,” said Olesia Briazgunova, international director of the Confederation of Free Trade Unions of Ukraine. Among the thousands of Ukrainians defending their country are union members, while other unionists are “dodging bullets and shelling to deliver humanitarian aid.

“At the same time, we are following situations in other countries like Myanmar, Belarus and Hong Kong, and every threat that spreads evil in the world.”

Tunisia, meanwhile, is going through an economic, financial, social and institutional crisis, and “conditions are deteriorating with the inability of the elite to develop democratic institutions,” said Hedia Arfaoui, deputy secretary general of the Tunisian General Labor Union (UGTT). Youth are especially disillusioned, she added, with little hope for employment or a reduction in the poverty rate.

Many Tunisians are concerned that the democracy gains made following the 2011 revolution—especially those made by women, including full gender equality under a new constitution—will be dismantled. Tunisian President Kais Saied, who is currently ruling by decree, has said he will replace the 2014 constitution. Hundreds of thousands of UGTT members took part in a general strike June 16.

“Women’s rights are an integral part of the human rights system. And Tunisian women and trade unionists are aware of the danger of rollbacks of all they have won,” she said.

In Ethiopia, where politics are based on ethnic groups and a divisive war continues, the Confederation of Ethiopian Trade Unions (CETU) promotes inclusion, peace and dialogue, said CETU President Kassahun Follo. As the largest multi-ethnic, civil society organization in the country, the union focuses on common goals, “uniting on workplace issues and labor rights,” he said. Since October 2021, CETU has organized 30,000 workers.

“There are no human rights, no labor rights without democracy. And today, fewer than 20 percent of people live in truly free countries,” highlighted Sharan Burrow, general secretary of the International Trade Union Confederation. “We can only ensure peace and democracy through social justice.”

Participants also expressed concern over the situation in Hong Kong and pledged support to working people and unions in Hong Kong who are under severe pressure. 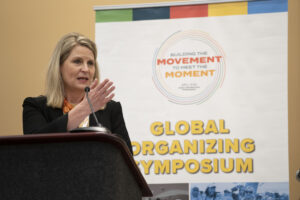 Lebogang Mulaisi, labor market policy coordinator of the Congress of South African Trade Unions (COSATU), said that very early on, COSATU recognized that “climate issues are workers’ issues,” and COSATU’s work to bring about a just transition is based on three principles: distributed justice, procedural justice and restorative justice. The first ensures the benefits and burdens of what is a very disruptive process be distributed. Procedural justice means everyone affected is involved in determining the rules that guide the transition. And with restorative justice, vulnerable populations most affected by unemployment and inequality—among them women and youth—are both participants and beneficiaries.

“It will take strong unions to bring about a just transition,” she said.

In Brazil, efforts to move toward the use of renewable energy are a challenge not least because democracy there is under threat, said Quintino Severo, deputy international affairs secretary of CUT Brazil. “A great challenge is to make sure all the rights we have won are respected,” he said. “Clean energy isn’t clean if it’s tainted by the blood of workers.”