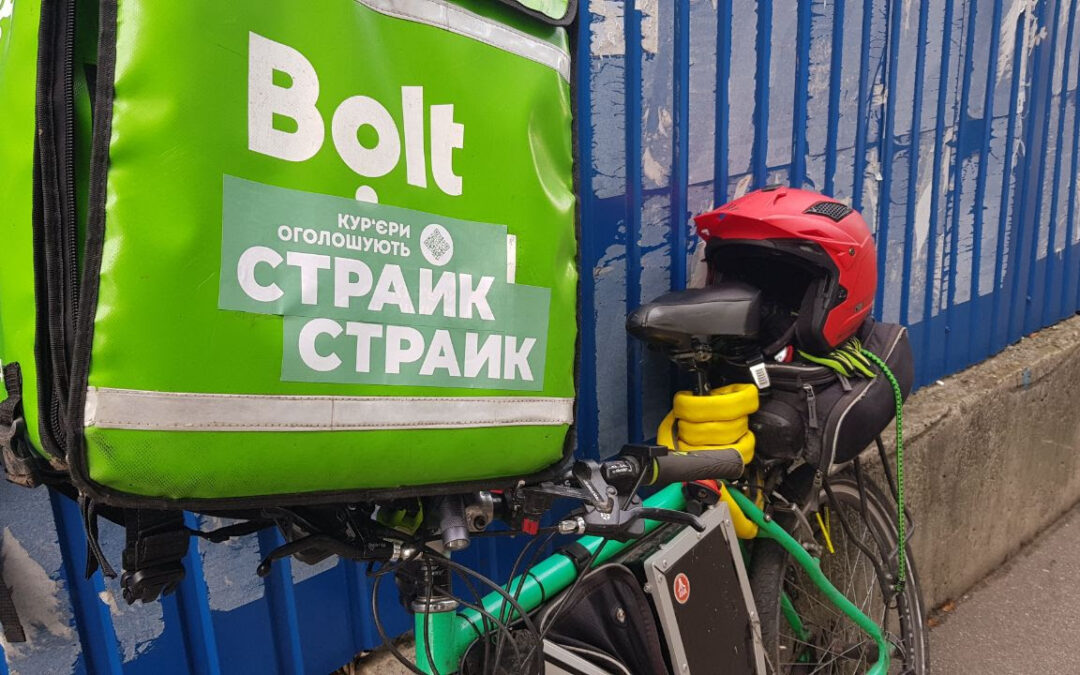 Platform delivery workers in Ukraine, many of them displaced from their homes, are demanding decent wages as they continue to work in the midst of war.

On May 12, delivery drivers in Lviv went to Bolt Food’s headquarters to deliver their suggestions and seek an open dialogue with the company. Participants dressed to conceal their identities because they say the company has punished workers in the past with “robo-firings” and “robo-suspensions” by excluding them from the app.

Many of the delivery riders in Lviv have fled cities impacted by the war in Ukraine. In several cases, they are homeless or the only breadwinners left for their families.

In a video produced by Ukraine’s Labor Initiatives, workers describe their situations.

“I am from Mykolaiv,” says one worker. “Mom and Dad lost their jobs there. I don’t have a place to live here and I don’t even have enough money to eat. Bolt … said they would support favorable conditions. Both for themselves and for couriers. But they simply did not warn anyone, removed the minimum pay, lowered all the ratios.”

“How are the IDPs supposed to live,” he asks, “who have no housing, no work [and] don’t have anything to eat?”

Another worker describes the deterioration in pay. “They took away the minimum payment for delivery. And the ratios were reduced by almost half. Here a colleague has calculated that it, approximately, will give a reduction of wages by 52 percent.”

Workers said the company has failed to explain the reasons for the changes. Meanwhile, workers who rely on cars and motorcycles and have to keep their vehicles fueled in order to work face rising gas prices.

“Fuel is among my expenses,” said one worker. “Now I don’t know if I can even pay for it.”

The demands of these workers clearly show that platform-based companies abuse worker rights in extreme environments using the technology the companies have set up to maximize profits.

Delivery companies are “not regulated properly,” one delivery rider said. “Each service acts as they want. Some platforms employ people as ‘private entrepreneurs,’ some just saying ‘You are plugged into the platform” and you should be grateful for it. Because of that, many issues arise.

“And if after all this,” he continued, “some trade unions … will be formed, that will be great. People should have the instrument to solve the issues. Strange as it may sound, that may even be worth their lives.”