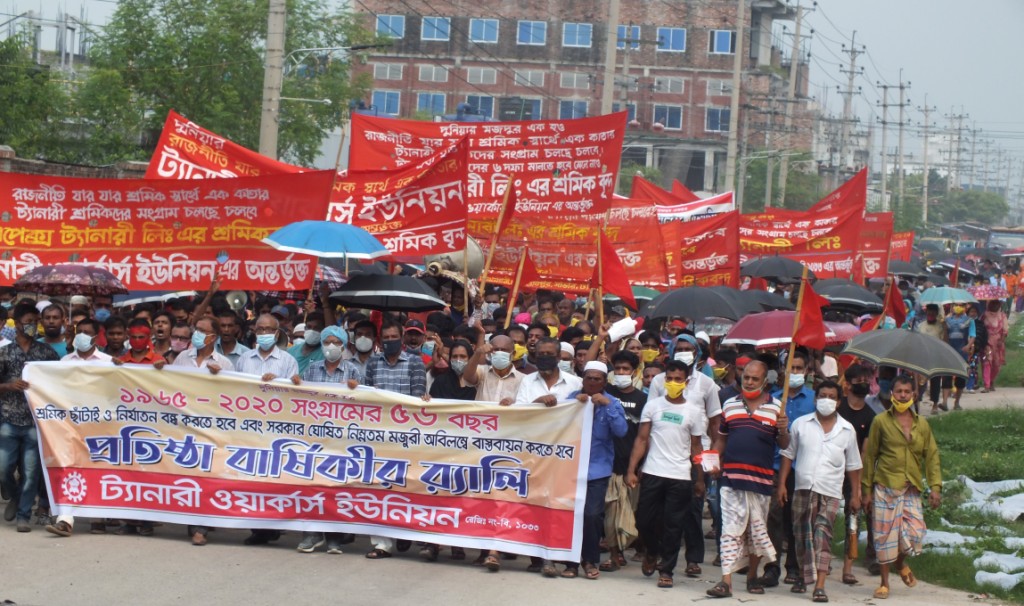 Union leaders and labor rights activists are demanding the government of Bangladesh secure jobs for tannery workers before taking punitive action against the industry for its role in environmental pollution.

The demand was made at a discussion following the recommendation of the Standing Committee on Ministry of Environment, Forest and Climate Change to close polluting tanneries in Hemayetpur, located in the Savar area, which is also home to much of the country’s garment sector. The discussion was organized by the Bangladesh Tannery Workers Union and the Solidarity Center.

Tannery Workers Union (TWU) President Abul Kalam Azad emphasized that tannery workers were not responsible for the pollution but would be hardest hit by the action.

Leather production is one of Bangladesh’s oldest industries, and tanneries employ 92 percent of all leather workers. The country’s leather exports satisfy one-tenth of world demand.

The leather industry is also a major polluter. For decades, tanneries in the main industrial site in Dhaka dumped 22,000 cubic meters of toxic waste daily into the Buriganga River, according to the government’s reports. The pollution wiped out aquatic life and forced the city to rely heavily on groundwater for washing and drinking.

In 2017, amid increasing international pressure about toxic environmental and working conditions in tanneries, the Bangladesh government ordered a massive relocation of the industry from Hazaribagh, a Dhaka neighborhood and one of the most polluted places on Earth, to the newly built Tannery Industrial Estate in Hemayetpur—just 14 miles outside of the capital. Of the 220 tanneries at the Dhaka site, 123 completed the move and are currently operating in Savar. The move impacted approximately 25,000 workers and their families.

The new site included a central effluent treatment plant (CETP) and facilities for chrome recovery, water treatment, and sludge treatment. However, the system is not treating all of the sludge and effluents produced by the factories, creating an additional environmental threat.

The local community says the Dhaleshwari River has become “unusable” and “toxic,” for themselves and their livestock, and farmers cannot use the river for irrigation, affecting their livelihoods.

At a recent discussion marking the 57th anniversary of the founding of the Tannery Workers Union, speakers called on the government to take steps to solve the existing problems of the industry and to build an environmentally friendly leather industry.

TWU General Secretary Abdul Maleque spoke of the union’s history. “Tannery Workers’ Union has been beside the workers for the last 57 years with the participation of all workers irrespective of any party affiliation,” said Maleque. “For the last 38 years, the Tannery Workers’ Union has been working to protect the rights and interests of workers by executing bilateral collective bargaining agreements with employers’ associations every two years, which is a unique example in the history of trade unions in Bangladesh. There is no alternative to organizing the workers and building strong workers’ unions to realize their rights.”