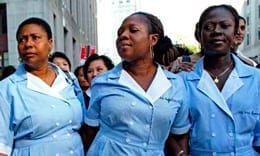 In Colombia, “even when there’s an improvement in the overall economy, women don’t see any improvement,” says Sohely Rua Catañeda. As a result, many women who are unable to secure formal employment are forced into the informal sector to support themselves and their families, laboring as domestic workers or street vendors. Women in these low-paying jobs have limited or no access to social services and are unable to address workplace harassment or unsafe working conditions.

Rua Catañeda, secretary of women and labor at the Escuela Nacional Sindical(National Union School, ENS), Colombia’s pro-worker think tank, recently met with Solidarity Center staff and others to discuss current ENS research on women in the Colombian economy. The Colombian labor market is “a reflection of discrimination,” she says, a statement she bolsters with ENS research that points to cultural factors blocking women’s economic advancement.

Only 8.5 million of the 18.2 million working age women have jobs—compared with 12 million working age men who are employed—and the vast gender gap in workforce participation is largely due a type of cultural discrimination in which employers seek women who fit a certain ideal. And that ideal, says Rua Catañeda, is one that frequently excludes Afro-descendent women, those who are over age 40 and those without the financial resources to buy new clothes or get manicures.

“There’s a lot of pressure for women to invest in their outer appearance for jobs. Afro-descendent women will never have an opportunity for these jobs,” Employers’ preferences for blonde women with straight hair requires women to spend a lot of time “conforming to an image that is really not what we look like.”

Seeking to improve the conditions of low-wage women workers, ENS is working to connect women with unions to strengthen their voice on the job so they can collectively improve wages and working conditions. ENS works closely with the Solidarity Center to support the Afro-Colombian Labor Council (Consejo Labor Afrocolombiano), founded last year by Afro-Colombian labor leaders and Colombian trade unions to advance racial inclusion in the labor movement and in Colombian society. Afro-Colombians comprise more than three-quarters of the country’s poor. Since then, Afro-Colombian women launched the Union of Domestic Service Workers (Unión de Trabajadoras del Servicio Domestíco, UTRASD) in Medellin, the first-ever union in Colombia created entirely by Afro-descendent women.

Rua Catañeda says the first step toward opening the labor market to women is to convey the extent of the problem to the Colombian public. Colombians, who see many women working in public places, think they have plenty of access to jobs, she says. Further, many women’s groups have focused on individualist, entrepreneurial solutions which in the past 10 years have seen few results.

But such solutions have not gone far to address most women’s economic struggles. “What you have are a lot of really tired women who have put a lot of work into their jobs and are poorer than ever before.”

Although recent legislation improving worker rights has passed, Rua Catañeda says technical and other reasons have prevented beneficial legislation from being enforced—making women’s increased membership and involvement in unions all the more critical