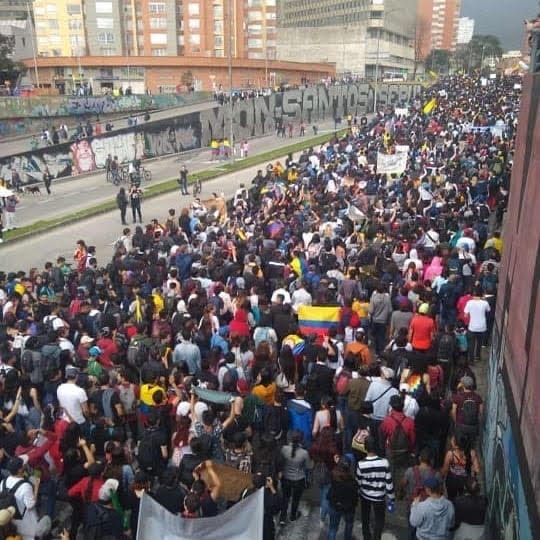 Workers and their unions in Colombia will hold a national strike April 28 to protest a tax hike proposed by President Iván Duque that would increase costs for workers already struggling from lost jobs and income from the COVID-19 pandemic.

Union leaders say the tax plan is misleadingly labeled a “Sustainable Solidarity Law” and instead would raise taxes on fuel and electricity and greatly expand the number of people required to pay additional taxes. The plan also would increase taxes on produce, harming both farmers and consumers.

It is a “tax reform that disguises itself as solidarity, ” says Unitary Workers Center (CUT) President Francisco Maltés.

Unions across Colombia have joined in solidarity to hold the 24-hour strike as part of a Unified National Command (Comando Nacional Unitario) comprised of the CUT; the General Confederation of Workers (CGT); the Workers Confederation of Colombia (CTC) the Education Workers Federation (FECODE); and the Confederations of Pensioned workers (CPC and CDP).

In an 11-point set of demands, unions say the government should establish tax reform based on progressive taxation so those who earn more pay more. Unions also say taxes should be lowered for small and medium businesses while increased for big business, including multinationals. Further, tax evasion should be effectively punished and taxes increased on large land

Colombian workers have been especially hard-hit during the pandemic. Unemployment is at a record 20 percent, with more than 5 million people losing their jobs.

Women in Colombia, as around the world, have been disproportionately affected. Between September 2019 and September 2020, for every man who lost his job, 2.2 women did so, nationally. In smaller cities, for every eight women who lost their jobs, one man lost his job. Many women work in the informal sector, where nearly half of Colombians make their living as market vendors and domestic workers, who are paid low wages and are not covered job protections like health care.

Beginning in November 2019, tens of thousands of workers have taken to the streets to protest the Duque government’s repeated attempts to hike prices and reward corporations with tax cuts.