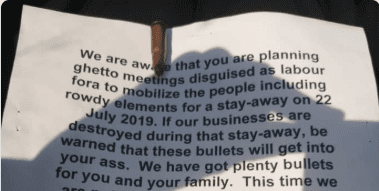 “This is the first time, for all we know in our history, that bullets are delivered at the homes of trade union leaders, said ZCTU in response. 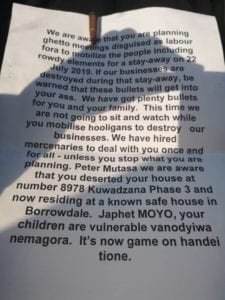 Union leaders in Zimbabwe say this is the first time leaders have been threatened with death for seeking to exercise freedom of association. Credit: ZCTU

The identical threatening letters warn Mutasa and Moyo not to participate in an upcoming July 22 work stoppage by ZCTU members who, with other civil society groups, have been protesting rising prices in the country—including a 150 percent fuel price hike.

If Mutasa and Moyo “mobilize the people” the letter warns, the letter’s authors have hired mercenaries “to take care of you once and for all,” “have got plenty of bullets for you and your families” and know where Mutasa–currently in hiding for his own safety—is living.

Mutasa has been forced into hiding by ongoing violence and intimidation by authorities. After ZCTU helped organize a national strike in January this year to protest price hikes, police seeking Mutasa allegedly assaulted his brother at his home. ZCTU staff also reported intimidation by police. Arrested and  charged with subversion, Mutasa and Moyo have since remained in legal limbo as the Zimbabwe government repeatedly postpones their trials.

January’s violent clashes resulted in 12 deaths and 320 injuries, blamed by human rights organizations on the army and police.

In the aftermath of a similar protest in October last year, some trade unionists were beaten, Mutasa, Moyo and 33 other trade unionists were arrested, senior ZCTU leadership was forced into hiding and ZCTU Harare offices were cordoned off by some 150 policemen. The Zimbabwe Human Rights Commission found that torture of protesters by government forces before and immediately after the October national protest—consisting mostly of “indiscriminate and severe beatings”—was widespread.

An attempted fact-finding visit by a delegation of the International Trade Union Confederation (ITUC) in February this year resulted in denial of visas for most of the delegation and the arrest of  ITUC-Africa Secretary General Kwasi Adu Amankwah by state security.

The majority of Zimbabwean workers eke out a living in the informal economy, struggling to survive on less than $1 a day. Those with formal jobs often do not fare well either. A 2016 study by the Solidarity Center found that 80,000 workers in formal jobs did not receive wages or benefits on time, if at all. In many cases, they made only enough to get to work.