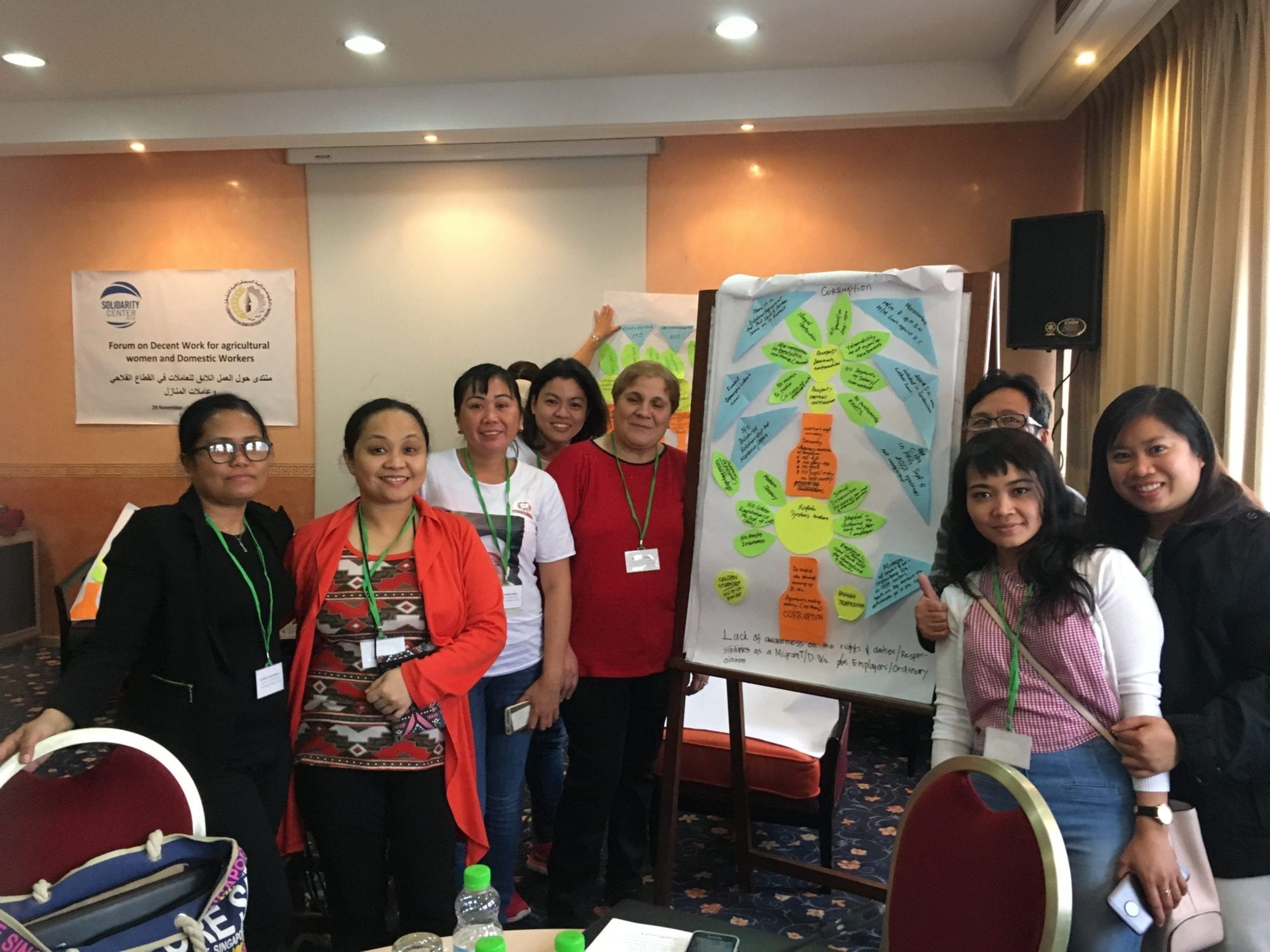 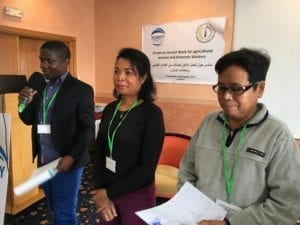 Following heartfelt rounds of songs on workers’ struggles and union solidarity, some 30 worker rights advocates launched the second day of the Forum on Decent Work for Agricultural Women and Domestic Workers. Discussions centered on the lack of migrant worker rights and the commonalities between the treatment of domestic workers and farm workers, and participants concluded the day by sharing success stories and best practices from around the world.

The November 29–December 1 forum in Casablanca, sponsored by the Solidarity Center and the Democratic Labor Confederation (CDT) in Morocco, includes representatives of unions and worker associations from Jordan, Kuwait, Lebanon and Morocco.

“We have to be aware of all the different ways our employers and governments try to divide us from each other,” says Erin Radford, Solidarity Center senior program officer for North Africa, opening the conference with small group discussions.

In conversation with each other and together as a group, forum participants explored how migrant workers often are paid lower wages than a country’s standard minimum wage, are prohibited from forming unions and typically are not covered by basic social protections, like pensions. Gender also is a key dividing line at work, and participants shared how women are treated as lesser than men at work, even as they take on most of the care burden at home.

These divisions, says Radford, are how employers “can increase their control over workers and exploit them.”

‘Labor Is Not a Commodity’ 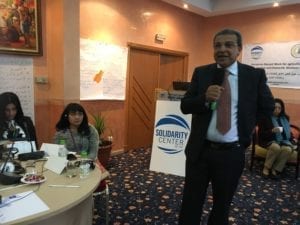 ‘Labor is not a commodity’—Mohamed Korri, labor relations expert and former consultant in the agricultural sector. Credit: Solidarity Center/Tula Connell

Divisions in labor rights between farm workers and non-farm workers are especially acute in Morocco, says Mohamed Korri, a labor relations expert and former consultant in the agricultural sector. As part of a panel presentation with experts on decent work and migration, Korri listed the ways in which farm workers have fewer rights and protections than other workers: they are paid less than the standard minimum wage, they are not eligible for paid holidays and they face such strict pension restrictions they rarely qualify for paid retirement.

There is little incentive for legislators to improve the laws, he said, because many own farms and benefit from worker exploitation. “Labor is not a product, not a commodity and must be treated humanly,” he says.

Also on the panel, Bachir Znagui, a media professor from the HEM Research Center, overviewed the conditions of domestic workers and migrant workers in Morocco and the international conventions covering their rights, and shared best practices from countries around the world, including Uruguay, which requires labor inspections of the homes of those employing domestic workers. 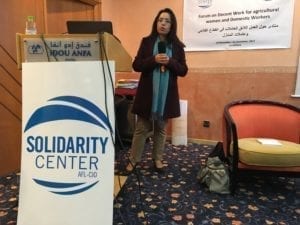 Znagui’s presentation showed that growing numbers of workers are forced out of formal-sector employment and into jobs with low wages and no social protections or job security—hitting women and migrant workers the hardest because they comprise the majority of workers in the informal economy. The increase in low-paying, temporary jobs is fueled by a rise of corporate rights and corresponding decrease in worker rights around the world.

Key to decent work is the freedom to form unions, the elimination of child labor and forced labor and the elimination of workplace discrimination, says Fatima Idahmad, national coordinator for the International Labor Organization (ILO) in Morocco. Idahmad  highlighted how the ILO is raising awareness among workers about their rights throughout Morocco.

Working together—across organizations, job categories and countries—workers can push back against global corporate forces and unsupportive governments. And in sharing success stories, forum participants began crafting strategies to take back to their workplaces. 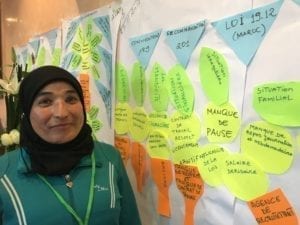 Marie Constant, a domestic worker in Lebanon originally from Madagascar, was among activists who led the formation a domestic workers’ union in that country, the first of its kind in the region. Constant described how union members, nearly all of whom are migrant workers, receive key support from National Federation of Employees’ and Workers’ Unions in Lebanon (FENASOL).

“Even if we know we have a long way to go, that there are a lot of hurdles along the way, we are advancing not regressing,” she says, speaking through a translator.

A union contract has completely transformed the conditions under which farm workers toil on Les Domaines Brahim Zniber farm, says Hayat Khomsi, a farm worker in Meknes El Hajeb and activist with the CDT.

Under the landmark 2015 agreement, which now covers 1,200 workers on six farms, workers for the first time have formal employment contracts with job security, paid leave and other social protections. Crucially, women now have equality with men, enabling the women farm workers, who previously were blocked from “male” jobs, like truck driving, access to these generally higher paying jobs.

“Now we have achieved a similar status to that of the men,” says Khomsi. “Now I am a team leader and before no woman could have been a team leader.”