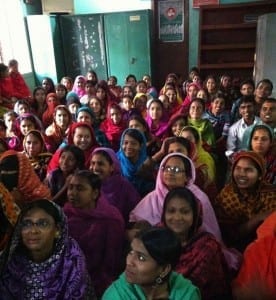 Bangladeshi union organizer Hasina Akter was talking with garment workers in Dhaka when a group of at least 20 people accosted her and the three other union organizers and a worker leader with her. She and her companions were threatened and beaten, one into unconsciousness. Two organizers had to be hospitalized following the assault, and the factory worker went into hiding.

The February attack was not an isolated incident. Union organizers in Bangladesh are in constant peril, and these brave women and men need your help.

Your tax-deductible contribution to the Bangladesh Worker Rights Defense Fund will support Bangladesh garment organizers and worker-activists as they help workers who toil in unsafe factories for unfair—or unpaid—wages and who, without a union, cannot exercise their rights. Activities your donation may support include: