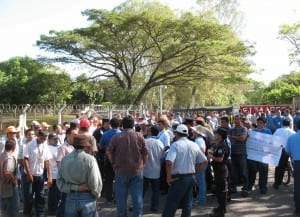 The promotional website for AERODESPACHOS in El Salvador features workers loading airplanes, transporting baggage and servicing engines. Yet while the airline ground services company wants to showcase its workforce, it is unwilling to provide safe working conditions and decent wages, its employees say. And when the ground servicing crew sought to address safety and health issues by forming a union, AERODESPACHOS fired 96 employees—nearly its entire staff—to reduce the number of workers seeking to join a union and so legally disqualify their efforts.

The Ministry of Labor has ordered their reinstatement and condemned what it has called “serious, anti-union acts.” The company has not complied.

Since May 2011, when the workers first formed a local union with SITIAPES (the Industrial Union of Aeronautical and Connected Industries Workers of El Salvador), the company has refused to negotiate a contract, petitioned the court to be exempt from unionization and ignored some government orders to address safety hazards.

AERODESPACHOS, which operates through a contract with a state enterprise (CEPA) to assist international flights from major airlines, also replaced some of the workers it hired through subcontractors.

According to the Center for Worker Education and Support (CEAL), a government inspection last year found inadequate and deplorable facilities, including dirty and deteriorating dormitories and break rooms, no fire extinguisher, no individual labor contracts and no posted work rules.

SITIAPES has called on the Ministry of Labor, the airport authority, and the government of El Salvador to force AERODESPACHOS to comply with the law—in particular to respect freedom of association and collective bargaining.

AERODESPACHOS’s contract with CEPA expires in March 2013, and SITIAPES is asking that CEPA not give the company another contract and that the 96 fire workers be rehired by the replacement contractor.