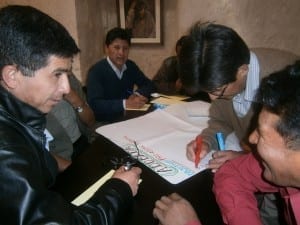 Textile workers at a meeting in Arequipa, where union leader López was fired after a successful contract campaign. Credit: Milko Sotomayor

José López Mota, former leader of a textile workers’ union local in Peru and current general secretary of the regional textile federation FERRETEX, was fired on February 10, 2014. He was dismissed after the union achieved a collective bargaining agreement in late 2013 for allegedly missing more than 15 days of work without permission. However, López was conducting union business during those days, using legally mandated union leave.

“They want a leader who does not speak up. I fought for union rights and alongside my brothers and sisters, we achieved two significant improvements in the two years that I was in charge,” López told Peruvian newspaper La República.

Last month, the union held elections in which López was replaced as general secretary. Although he continues to serve as the general secretary of the regional textile federation, he no longer is protected by “union immunity” (fuero sindical) extended to workplace union leaders.

The factory management says López took days off without permission. During that time, López used his protected right to take union leave to help conduct contract negotiations and attend labor conciliation meetings with company participation at the Arequipa regional labor directorate. But because he did not always ask for days off in writing, he has no paper trail to prove he was absent for legitimate union work.

“These methods (of repression) that were common practice in the past no longer generate the effect desired by employers who continue in this retrograde mentality,” said Geronimo López, Arequipa Region secretary-general of the Confederación General de Trabajadores del Perú (CGTP). The CGTP is one of Peru’s four main union federations. “On the contrary, to confront these anti-union actions, workers understand that they need to strengthen their unity and act with even greater commitment to defend their rights.”

Peruvian labor federations and international organizations are concerned about this violation of International Labor Organization (ILO) Conventions 87 and 98 (freedom of association and freedom to form a union and collectively bargain), and the intimidation tactics used to silence a labor rights defender in Arequipa’s booming textile and apparel sector.