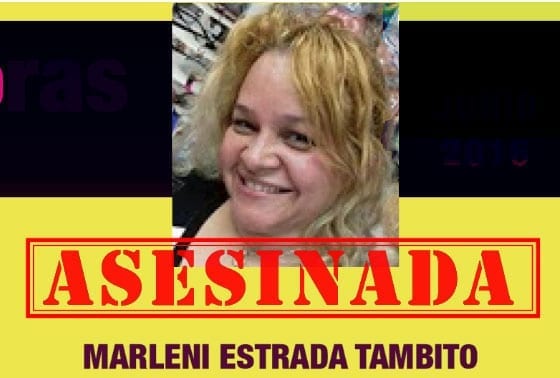 The murder of Brenda Marleni Estrada Tambito, deputy coordinator of the Legal Advisory Committee of the Trade Union of Workers of Guatemala (UNSITRAGUA / HISTORICA), was a “cowardly criminal attack” according to the Trade Union Confederation of the Americas (TUCA) union leaders, who strongly condemned her murder in a letter to Guatemala President Jimmy Morales Cabrera.

Estrada Tambito was shot five times and killed in Guatemala City June 19. She was followed from a bus terminal after dropping off her father, UNISTRAGUA leader Jorge Estrada y Estrada, who has been advising the negotiation of collective agreements in some of the banana plantations in the Department of Izabal. Several banana union leaders in Izabal have been murdered in Guatemala in recent years, and in 2014, 11 leaders from the UNSITRAGUA-affiliated banana workers’ union were fired on while at the plantation.

“This cowardly murder has again pushed families and the labor movement into mourning and reflects the climate and culture of fear of persecution and violent silencing that lingers in Guatemala and is suffered by workers, leaders and union officials,” TUCA (the Trade Union Confederation of the Americas) and its parent organization, the International Trade Union Confederation (ITUC), wrote.

“This situation is intolerable.”

Union activists are frequent targets for violence and harassment in Guatemala. In the first quarter of 2016, one union member was murdered, another physically attacked and 12 instances occurred in which union activists were threatened or harassed, according to the Red de Defensores de Derechos Laborales (Labor Rights Defenders Network) in Guatemala.

Last year, the Network, a coalition of trade union confederations and human rights monitors, documented 14 incidents of anti-union violence in Guatemala, including the October 2015 murder of Mynor Rolando Ramos Castillo, a municipal worker in southeastern Guatemala.

Some 62 union members and leaders in Guatemala have been murdered since the U.S. government pursued an April 2008 complaint against Guatemala for violating the labor chapter of the U.S.-Central American Free Trade Agreement (CAFTA). The government acted after six Guatemalan unions and the AFL-CIO submitted a complaint with the Office of Trade and Labor Affairs (OTLA).

In an unprecedented move, the U.S. government last year agreed to take Guatemala to international arbitration for violating worker rights under CAFTA. The action was the first time that a country has sought international arbitration against another for a violation of labor standards and followed Guatemala’s failure to implement an 18-point enforcement plan to address worker rights violations. More than eight years since filing the complaint, labor rights violations and attacks continue, as the arbitration panel has announced another delay.

TUCA and the ITUC are urging the government to take steps to ensure the safety of trade unionists and to investigate and punish those responsible for Estrada Tambito’s murder. Despite ongoing violence against union members—murder, torture, kidnappings, break-ins and death threats—few perpetrators are brought to justice.