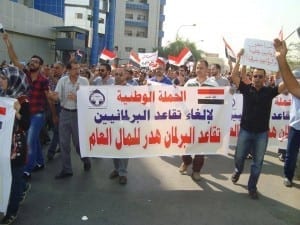 Iraqi workers and their unions recently took part in nationwide protests to demand better wages and working conditions and improvements in essential services, such as electricity and infrastructure. The General Federation of Iraqi Workers (GFIW) also demanded an end to the exorbitant salaries and pension benefits of government officials, whose compensation offers a sharp contrast with that of millions of workers, who are paid wages so low they cannot support themselves and their families. Workers and their unions say they want a fairer salary scale and increased pensions and social insurance.

When workers took to the streets across Iraq August 31, in some areas, like Nasseryya in the south, governmental security forces and anti-riot police used live bullets to disperse the crowd. In Baghdad, security forces used stun grenades and water cannons on demonstrators and closed roads to prevent people from joining in protest against the Iraq Parliament. Security forces arrested four wounded protestors while they were receiving treatment in the hospital.

Government paralysis, stalled infrastructure improvements and a deteriorating economy have worsened the living and working conditions of most Iraqis. The independent union movement, formed in the wake of Saddam Hussein’s 2003 ouster, continues to push for stronger guarantees in social insurance and health protections for workers and their families, and plays an effective role in calling on the Iraq government to rebuild the country by establishing a strong base for democracy, equality and social justice.