Aldaberdi Karimov, 42, who lives in a remote Kyrgyzstan village in the Batken region, did not want to migrate from his country to find work to support his family, including his daughter, Ak Maral, now 5 years old.

But like many in Kyrgyzstan, where remittances from workers abroad make up more than 25 percent of the country’s gross domestic product, Karimov faced the heart-wrenching decision to leave his family to find employment. In fact, so few good jobs are available in the country, especially for workers in rural areas, only 24 percent of Kyrgyz workers are employed in the formal economy. 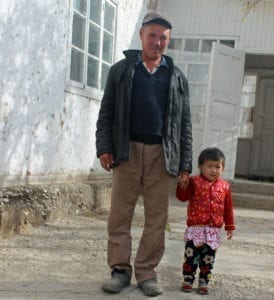 Aldaberdi Karimov escaped from forced labor and is back in his Kyrgyz village with his family, including his daughter, Ak Maral. Credit: Solidarity Center

And when he left his village, Karimov had no idea he would be a target of force labor and human trafficking. Globally, more than 21 million people are in forced labor, according to the International Labor Organization, which on July 30 marks World Day against Trafficking in Persons.

Forced to Live with Cows in the Barn

Karimov first sought jobs in Russia and then migrated to Kazakhstan, where he worked as a market vendor in Almaty, Kazakhstan’s largest city. Karimov thought he would fare better in Kazakhstan because, like Kyrgyzstan, it is a member of the Eurasian Economic Union.

Between 100,000 to 150,000 Kyrgyz were registered in Kazakhstan at the end of 2017, figures that do not reflect many who are not registered, according to a new report by the International Federation for Human Rights (FIDH). Most work without written contracts or on contracts that do not adequately protect their rights. Their passports typically are confiscated by employers, making it difficult for them to leave abusive jobs, and they have no access to labor protections like safe working conditions and paid leave.

Karimov could not afford the permit needed to sell goods legally in Kazakhstan—costing between $1,500 and $2,000, a permit is the equivalent of a year’s wage. Through an intermediary, he and his brother, Giyazidin, were led to a job on a Kazakh farm in June 2016 tending 100 cows and 2,000 sheep. The farmer said he would pay them 40,000 tenge ($117) each per month.

“The employer promised to pay us not every month, but once every three or four months,” Karimov says. “After three months, we asked for an advance and our employer became very angry and said that the cows and sheep are very thin, so he is not going to pay yet.”

By October, they each had been paid only $100 for six months’ work. Frost and cold rains began and when the brothers asked to be housed in a warmer environment than their small thatched hut in the field, the employer told them to live with the cows and rams in the barn.

Tens of Thousands of Workers in Forced Labor in Kazakhstan

Essentially trapped in forced labor, the brothers made their escape after Giyazidin became so ill that the farmer took him to the hospital. Tens of thousands of workers are estimated to be victims of forced labor in Kazakhstan, with migrant workers from Kyrgyzstan, Tajikistan and Uzbekistan forced to labor in agriculture, construction and the extraction industry.

Like many migrant workers, neither Karimov nor his brother reported their abuse to the police because they did not trust them. In fact, officers of law enforcement agencies often are the link between migrant workers and “buyers” of labor, according to the FIDH report.

Karimov says lack of a labor contract and no police protection left him and his brother vulnerable to human traffickers and inhumane working conditions. Around the world, most migrant workers are denied the right to form unions and bargain with their employer—a fundamental freedom that enables abuse and exploitation. “The lack of labor agreements entails forced labor and even slavery,” says Aina Shormanbayeva, president of the Legal Initiative, a Kazakhstan-based public foundation.

Now back in his village, Karimov says migrating for jobs is now out of the question, even as he searches for work, still seeking wages that will enable him to support his family