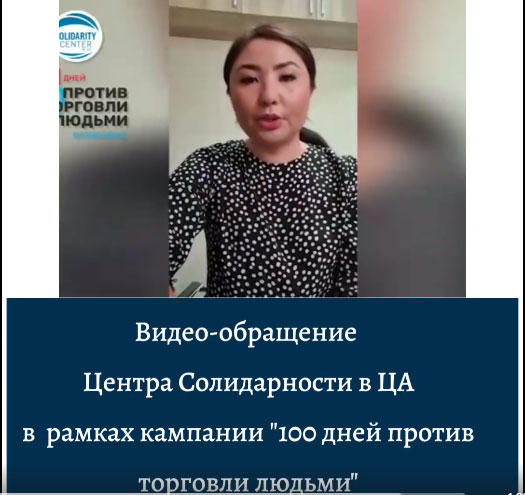 Insan-Leilek foundation and the Trade Union of Migrants of the Kyrgyz Republic, both Solidarity Center partners in Kyrgyzstan, are actively engaged in the “100 Days Against Trafficking in Persons” youth campaign. With a focus this year on worsening risks for workers who migrate abroad to earn their livelihoods during the COVID-19 crisis, the effort aims to raise public awareness within the Kyrgyz Republic on issues related to trafficking. Insan-Leilek is a local Kyrgyz diaspora foundation committed to providing aid to the country’s migrant workers.

As one of the organizers of the campaign, the Solidarity Center joined with regional coordinating councils on combating human trafficking; the country’s state agencies on Migration and Youth, Physical Culture and Sports; more than 30 youth organizations; UN agencies under UNODC; and donors including the U.S. Agency for International Development (USAID).

Campaign activities, held online due to COVID-19, include:

With Few Jobs for Youth, Young Workers Forced to Migrate

Youth un- and underemployment stands at 55 percent in Kyrgyzstan. Most young people feel forced to migrate in search of work, primarily to Russia and Kazakhstan, although also further to South Korea, Turkey or other countries. Kyrgyz migrant workers provide more than one-third of the Central Asian country’s GDP in money they send home. When workers migrate from Kyrgyzstan, they often face discrimination, exploitation and unsafe working conditions. Many are at risk of being trafficked and subjected to forced labor.

The Solidarity Center believes human trafficking is at its core about the exploitation of worker rights, and that the best way to prevent conditions that allow human trafficking is to ensure workers have the tools at their disposal to defend their rights. To that end, the Solidarity Center helps organize pre-departure training for migrants preparing to leave Kyrgyzstan to ensure they are aware of their legal rights and the conditions they may encounter, develops and disseminates informational materials on safe migration and provides contact information for legal support services should migrants encounter problems abroad. Working with partners in both origin and destination countries, the Solidarity Center also documents instances of migrant worker exploitation, including trafficking for forced labor, and helps migrant workers organize and join workers’ organizations to help them protect their rights.