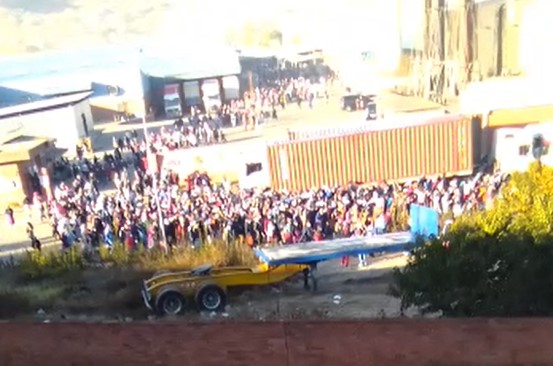 Lesotho unions report police violence against workers rallying for scheduled minimum wage increases on May 17, with police shooting 12 workers—including two children aged 7 and 9 years in Maputsoe and Maseru—and beating and arresting others.

In a demonstration of Lesotho’s widely reported troubled human rights record, peacefully protesting garment workers rallying since Friday for two promised, but indefinitely delayed, minimum wage increases were met on Monday in the capital, Maseru, and surrounding areas with police violence and intimidation.

Unions say the government deployed special forces, with police shooting 12 people—including two children, ages 7 and 9—in Maputsoe and Maseru, and beating and arresting others.

“Our garment worker members, with whom we are already addressing rampant gender-based violence in their factories, want the world to know that their peaceful rallies in support of scheduled wage increases were met with outsize police violence,” says Independent Democratic Union of Lesotho (IDUL) Deputy General Secretary May Rathakan.

Lesotho’s unions, including garment workers, are imploring the government to make good on two missed incremental minimum wage increases—for 2020/2021 and 2021/2022—that were due to be implemented by government gazette publication on April 1 but have been delayed indefinitely.

“These acts had exposed the workers to absolute poverty because their current salaries cannot address their needs,” says United Textile Employees (UNITE) General Secretary Solong Senohe in a media statement.