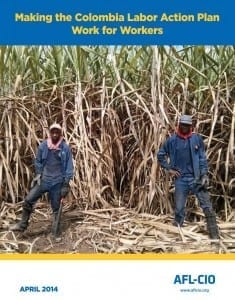 The governments of Colombia and the United States signed the Labor Action Plan (LAP) three years ago this week. The plan was intended to provide a road map for Colombia to protect internationally recognized labor rights, prevent violence against labor leaders and prosecute the perpetrators of such violence.

As a new AFL-CIO report shows, systemic violence against Colombian workers continues and workers still face persistent employer abuses. Palm workers like Miguel Conde of the union SINTRAINAGRO at the Bucarelia plantation initially were hopeful, but the LAP profoundly failed to deliver on its promises. In the blog, “Make the Colombia Labor Rights Action Plan Work for Workers,” the AFL-CIO Now writes:

“Like many Colombian workers, palm workers at Bucarelia were increasingly hired on as temporary subcontracts. Subcontracting prevents workers from forming unions, gets employers out of paying social security and other benefits due to direct hires and makes it easier to fire anyone who complains or supports unions., the LAP was supposed to end abusive subcontracting of those doing a company’s core work. When workers at Bucarelia learned  about the promised reforms, and that the palm sector had been specifically identified in the LAP, they launched an organizing campaign, thinking they had a way forward.