May Day: Workers Demand Their Rights around the World 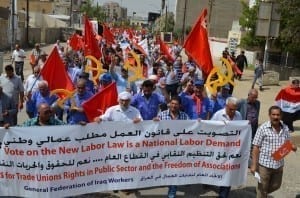 Union members in Bangladesh, Brazil, Iraq and Morocco were among Solidarity Center allies around the world who rallied, marched in parades and protested in the streets yesterday, marking May Day and the ongoing struggle to ensure workers have a place at the table in the larger global economy and at their workplaces.

In Brazil, UAW President Bob King joined the union Força Sindical at a May Day event with some 1.3 million workers. Iraq workers and their unions marched for passage of a revised law, now under debate in Parliament. Iraqi workers are still covered by a Saddam Hussein-era labor code.

Workers in Morocco celebrated the announcement of a 10 percent boost (over two years) in the minimum wage in the public and private sectors, an action spearheaded by trade unions. The minimum retirement pension also will be boosted, and student grants will increase. Workers say many improvements still must be made, however, and in rallies across the country challenged rising prices and high unemployment and called for social security coverage for all workers and respect for collective and personal freedom. 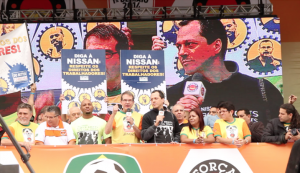 In Bangladesh, tens of thousands of garment workers turned out in events across the country. At the Jatiya Press Club in Dhaka, the capital, some 12,000 workers gathered, with many forming a human chain. Speaking at one event, Kamrul Hasan, president of Akota Garments Labor Federation, demanded workplace safety so garment workers never again die or become injured from factory fires or collapsed buildings, like Rana Plaza, which pancaked in last April, killing more than 1,110 workers.