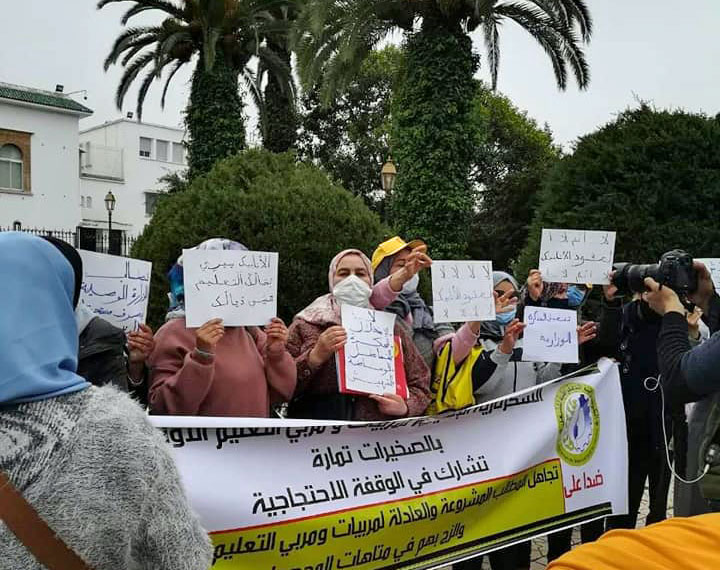 Child care workers and others in Morocco's education system are joining teacher protests to achieve rights at work. Credit: CDT

Teachers carried out protests throughout January against a government crackdown on their fundamental freedom to strike, with rallies at the Ministry of National Education and Vocational Training in the capital, Rabat, and across the country. Teachers also are protesting the working conditions of contractual teachers and the Ministry of Education’s refusal to engage in social dialogue. 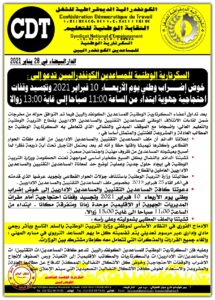 Morocco’s constitution has protected the right to strike since 1962, but the government seeks to revise the country’s labor law by adding significant obstacles to the right to strike, in violation of Morocco’s international legal obligations. Unions are calling on the government to engage in real social dialogue to develop legislation consistent with international law.

“These abusive measures constitute a flagrant violation of the constitution, of the guarantee of the right to strike and of national laws, as well as against international conventions that consider the right to strike a fundamental part of freedom of association,” the Democratic Labor Confederation (CDT) wrote in a December letter to Educational International. The global federation, Education International, strongly supports the CDT and the National Union of Teachers (SNE) in their efforts to push back against the government’s moves to limit essential worker rights.

The government also barred a planned December 22 sit-in on at the Education Ministry headquarters in Rabat, citing exceptional circumstances and the law on health emergencies. Union members and leaders called the ban illegal and said security service used force to disperse them before they could reach the Ministry’s headquarters.

The January actions follow a series of rallies and sit-ins across Morocco last fall, including a national general strike on December 1 and 2, as teachers protested the government’s move to reduce their seniority and promotion opportunities and its replacement of full-time teachers with teachers on contract who are paid lower wages and have no job security.

Morocco’s workers and their unions have been left out of discussions regarding management of the COVID-19 crisis and educational continuity, according to the SNE-CDT. The union says the ministry has not fully addressed health and safety conditions for teachers, education support staff and pupils.

Education ministry officials have frozen dialogue with teachers, last meeting with them in February 2019. One of the union’s fundamental demands is for the government “to open a serious and responsible dialogue on the outstanding demands from 2014 to today, and the respect of trade union freedoms and the right to strike.” Among the unresolved issues are improved wages, a voice for teachers in the education reform process, investment in public education, teacher training and more staffing to lower classroom size.

In early January, the CDT also spoke out against the ministry’s unilateral decision to cancel upcoming examinations for middle and high school students due to the pandemic, highlighting another example of how the education ministry fails to involve the representatives of teachers and other employees of the public school system in decision making.

In early 2019, a government decree removed the option of workers with renewable two-year employment contracts to integrate into the public sector, a move that means contract teachers have no access to fair wages and social benefits like pensions, health care or job security. The CDT has sought to replace fixed-term contracts with permanent employment.

The number of fixed-term teaching contracts is increasing in Morocco and undermines the core notion of public service. The change grants the government a waiver on its obligations, according to a recent CDT field study on the future of work in the education sector, carried out in collaboration with the Solidarity Center.  “Some of the direct results of casualization, as identified through the study, include instability, precariousness, dissatisfaction and lack of confidence in the profession’s future,” the CDT notes.

The study also finds an increasing number of women in all levels of the education system, and the future of work in the education sector must address this shift, says Younes Firachin, a member of the National Office of the National Education Union. That requires unions “to fully grasp these transformations” to effectively reach them and address their concerns, he says.

Employees throughout the public education system, frustrated by the lack of attention to their terms and conditions of employment, increasingly are joining the protests. On January 27, many who provide assistance to young children in kindergarten and primary school rallied in Rabat.

The CDT also announced a series of nationwide protests set for February 10 to mobilize administrative and technical assistants to call for their recognition by the Ministry of Education and Morocco’s public school system.