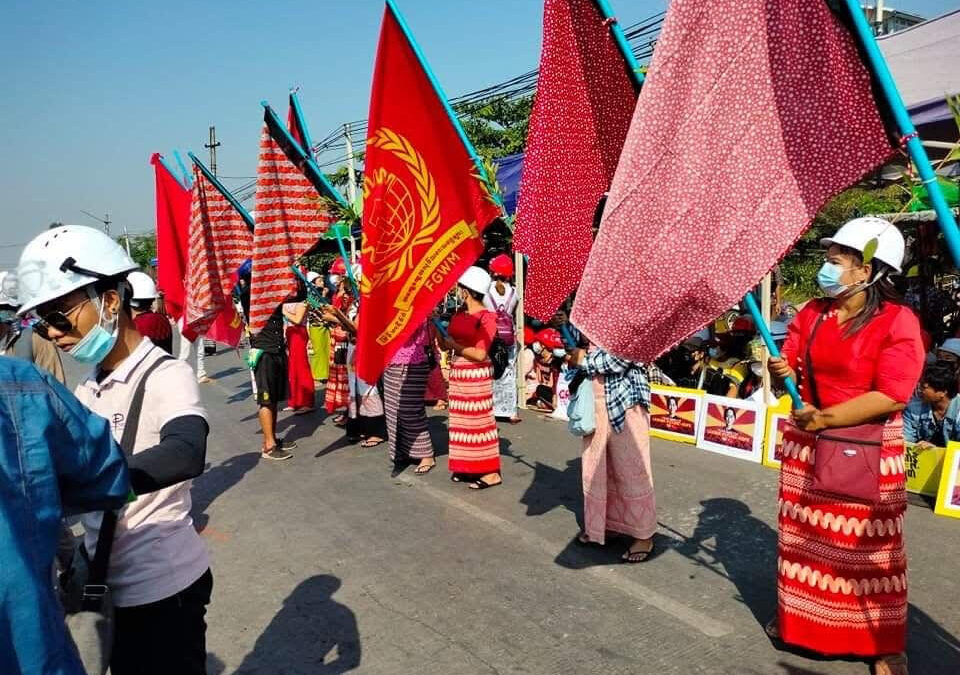 Myanmar unions march in Yangon during a nationwide strike against the military coup on Monday, March 8. Credit: Federation of General Workers Myanmar.

Trade unions shuttered workplaces and brought thousands of people to the streets Monday in Myanmar, mobilizing a general strike as part of their continued resistance to the military takeover of the government on February 1.

In a statement calling for a nationwide strike on Sunday, the coalition of 18 unions said: “To continue economic and business activities as usual, and to delay a general work-stoppage, will only benefit the military as they repress the energy of the Myanmar people; The time to take action in defense of our democracy is now. The workers of Myanmar are prepared to take action to protect democracy and save our future generations from dictatorship. We believe all Myanmar people are prepared to respond to a call to action.”

In response to worker leadership in the civil disobedience movement (CDM), including other work stoppages, the military has declared at least 16 labor unions to be “illegal organizations” and has arrested or filed arrest orders for at least 71 individual union leaders, sources in the Myanmar labor movement tell the Solidarity Center. In 135 confirmed cases, workers have been fired for participating in street protests, while thousands more have had their factory jobs threatened if they participate further in the CDM.

Myanmar unions are urging countries and businesses to publicly condemn the coup; to exercise due diligence to ensure no business or investment is linked directly to or associated with the military; to announce that future international investments in the country would be reconsidered if democracy is not restored; ensure that no worker or union leaders are punished for going on strike or joining the current demonstrations against the coup; and to protect and respect freedom of association and the rights to assemble and peacefully protest.

The global labor movement has condemned the military coup, including the International Trade Union Confederation, AFL-CIO and IndustriALL, and called for the immediate restoration of democracy.