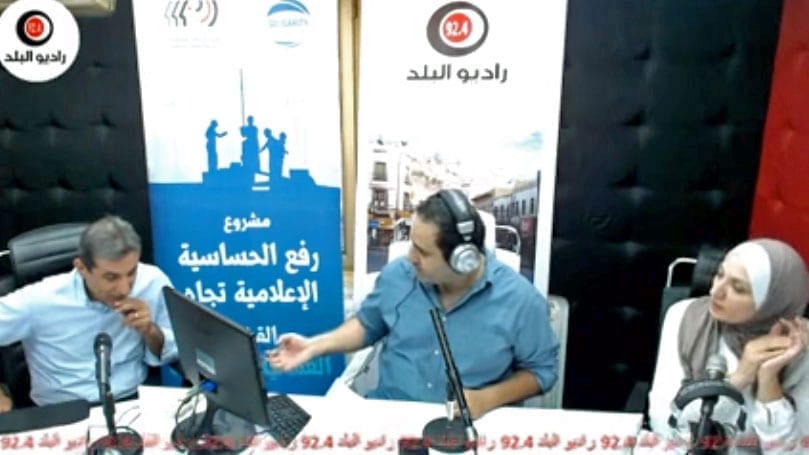 Callers to a recent radio show about taxi workers in Jordan had many questions, including:

The worker-centered radio show, Workers of the Country (عمال البلد), launched in July by the Federation of Independent Trade Unions of Jordan (FITU), offers the audience an opportunity to hear worker struggles and connects workers with the union—several callers to the August program asked how they could join FITU.

Hosted by Mohammad Al Ersan, in cooperation with FITU President Suleiman Al Jamani, the show has featured union activists and experts on domestic worker rights, labor law and sexual harassment and gender-based violence at work. Peppered with clips from worker rallies and opportunities for the audience to engage with speakers, the show offers a rare look at the day-to-day lives of working people and their efforts to improve their lives and livelihoods.

The segment on taxi drivers highlighted the drivers’ challenges in making a living, a struggle they share with “gig workers” and those in the informal economy around the world. As “self-employed” workers, the nearly 70,000 taxi drivers are excluded from labor laws, and so have no contract, paid leave, retirement or other social protections, Al Seryani said on the show. To make enough to get by, they work long shifts, up to 18 hours per day, which endangers drivers and passengers, he said, and they have suffered for decades without fundamental labor rights.

A union member who called in reinforced Al Seryani, saying the union was established because of the oppression the drivers face, and Manasour Murad, a member of Parliament who also called in said the Ministry of Transport lacks the strategic planning necessary to provide efficient transportation services, including the ability to improve drivers’ working conditions.

In bringing workers’ struggles to the forefront, the 50-minute program probes issues rarely highlighted in the mainstream media yet which are fundamental to the country’s economy and the working people who build it. Fundamental to the discussions are the ways in which unions enable workers to achieve a voice in improving their workplaces and standing up for their rights.

For instance, in exploring sexual harassment and other forms of gender-based violence (GBVH) at work during the show’s second segment, guests highlighted the role of unions in defending workers who experience GBVH on the job and how unions are a resource for assisting workers in reporting abuse while preventing retaliation for standing up for the right to a violence-free workplace. Wijdan Abu Ghanam, leader of the FITU women’s committee, Reema Khaled, an agriculture union activist, and Reem Aslan, a working women’s rights activist and founding member of the Association Sadaqa, a Jordanian women’s rights association, took part in the discussion.

With an estimated 440,000 to 540,000 migrant workers in a country with fewer than 10 million people, migrant workers are an essential part of the economy yet have few rights under labor laws, including the ability to form unions—a situation all-too often replicated across Gulf countries and around the world.

The country’s newly amended labor code was the focus of an early segment and an issue discussed throughout the shows. Signed into law in May, the amendments restrict workers’ fundamental rights to freedom of association and collective bargaining and fail to address long-standing limitations on worker rights in Jordan, according to the International Trade Union Confederation (ITUC).

The labor law also now makes it easier for employers to arbitrarily fire workers, says attorney and women’s rights activist Hala Ahed, who joined Hamada Abu Nijmeh, director of the Worker Center, in a discussion on the new labor codes. Further, independent unions like FITU are now unable to register as unions under the labor law.

Despite the challenges, Al Seryani says that as an independent union, FITU has achieved significant victories for workers in improving wages and working conditions, a message the country’s new worker-centered radio program is conveying each week through the voices of workers themselves.