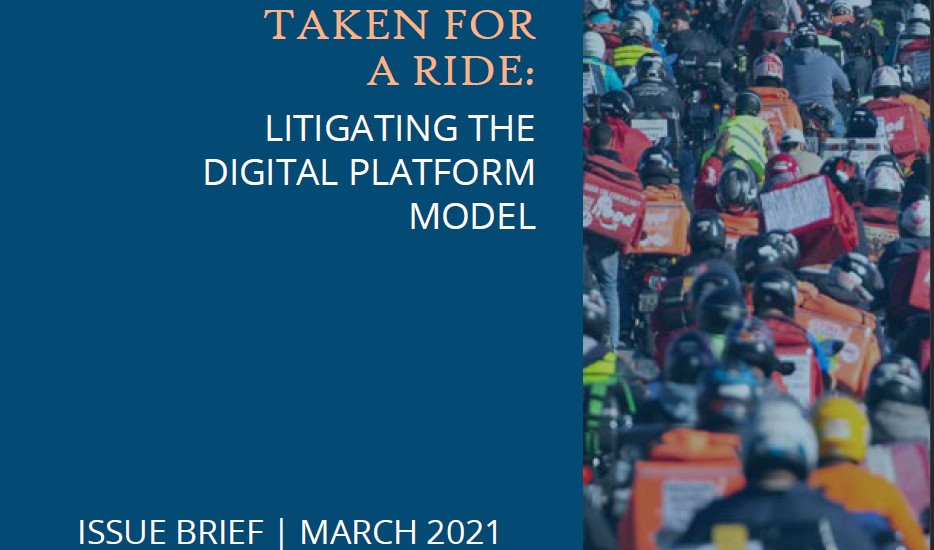 A new ILAW issue brief exposes employers' legal strategies to deny gig workers their rights. ILAW is a project of the Solidarity Center.

Gig economy companies employ multiple strategies that undermine gig worker rights around the world, according to a new issue brief by the International Lawyers Assisting Workers (ILAW) Network, a project of the Solidarity Center.

“Taken for a Ride: Litigating the Digital Platform Model,” released today, analyzes how companies such as Deliveroo, Foodora and Uber deprive couriers and drivers of their basic employment rights globally.

“The collection of cases analyzed in this report reveals the extraordinary extent to which these companies are embroiled in litigation around the world,” write co-authors Nicola Countouris, labor law professor at University College London (UCL) and research department director for the European Trade Union Institute (ETUI), and Jason Moyer-Lee, a fellow at Georgetown University’s Kalmanovitz Initiative for Labor and the Working Poor.

The brief details a string of losses for gig economy companies, including before the highest courts of France, Spain and the United Kingdom, and in lower tribunals from South Korea to Uruguay. Such worker victories have come at great cost and, due to weak enforcement regimes, gig economy companies often do not extend rights even after losing cases, concludes the report.

In countries where companies have seen more success—such as South Africa and the United States—the analysis shows how gig economy employers have deployed multiple tactics to pull off the victories, such as forcing workers into arbitration, making them sign complex and convoluted contracts, or relying on an international corporate structure.

“These companies have gone to great lengths to insulate themselves from responsibility and have put an extraordinary burden on workers to claim their basic rights at work. Governments must step in now and enact legislation that protects the rights of all workers providing labor to a digital platform company,” says Solidarity Center Rule of Law Department Director and ILAW Network co-founder, Jeffrey Vogt.

The report was made possible with funding from the Ford Foundation.