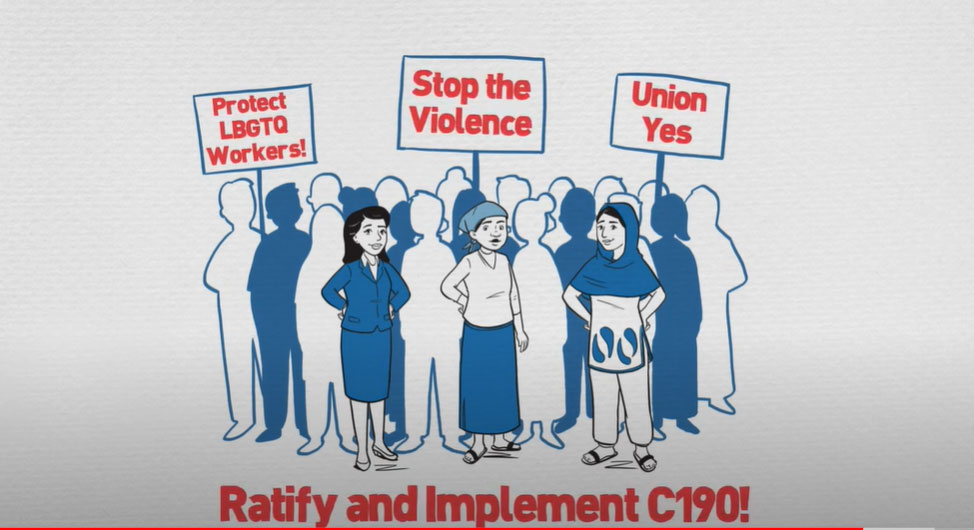 As union activists around the world urge their governments to ratify International Labor Organization Convention 190, the first global standard to address gender-based violence and harassment (GBVH) in the world of work, they also are educating and mobilizing members, allies and public to take action to end GBVH.

Now, Solidarity Center union activists and partners have a new tool for their campaign: An educational video that explains gender-based violence at work, describes how C190 can address it and how union activists can take the next steps to ensure it is ratified by countries around the world.

The whiteboard animation video—which shows the viewer images being drawn on the screen accompanied by narration—points out that GBVH is one of the most common human rights violations in the world that can affect any worker, but women most of all due to unequal power relations. It highlights how C190 is the first global standard to outline how governments, employers and unions must prevent GBVH—and makes clear that C190 is effective only if governments formally endorse it and pass laws implementing it.

The video updates the Solidarity Center’s popular GBVH whiteboard video for the global campaign to adopt a convention covering gender-based violence and harassment at work. That video was translated into Spanish, Russian, Georgian, Sinhala and Tamil.

Watch the video, share it widely and spread the word. As the video says: “Violence should not be part of the job for any of us.”