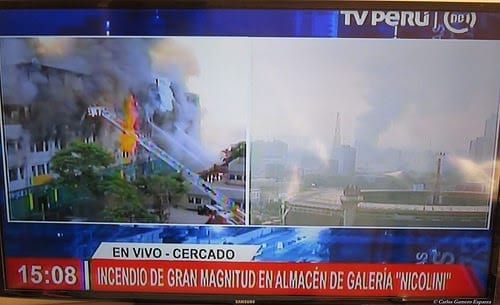 A deadly fire in a Peruvian warehouse has exposed forced and child labor and exploitive working conditions in the country’s vast informal economy. Four workers, one just 15 years old, who were locked into storage containers that doubled as work spaces are missing and presumed dead.

The blaze also injured at least 15 people, according to news reports. It took more than 500 firefighters five days to extinguish the flames.

On Thursday, June 22, the fire broke out in Nicolini Gallery, a building used for retail and manufacturing, located in the Las Malvinas area of Lima, Peru’s capital. Crammed with formal and informal businesses, the building included a fifth “floor” where metal shipping containers, ostensibly for storage, were used by JPEG SAC company as a workshop to produce counterfeit light bulbs. JPEG SAC employees included workers under 16 years old, who were not registered with the labor authorities.

The General Confederation of Peruvian Workers (CGTP) said that workers were killed ”not by mistake, happenstance, destiny or bad luck,” but rather they were victims of an “exploitive model that privileges profit by any means possible.”

“One of the victims called his mother to ask her to take care of his 21-day-old baby, knowing he would not make it out alive,” said Samantha Tate, Solidarity Center Peru country program director. “While it is not clear what started the fire, the building’s safety risks had been reported and it had been ordered closed. And it’s clear that these deaths were entirely preventable.”

The day before, more than 400 labor inspectors and assistant labor inspectors went out on a national strike to call for the strengthening of the National Superintendence of Labor Inspections, known as SUNAFIL. Among their strike demands, the labor inspectors called for an increase in the budget for the Labor Inspectorate to ensure proper protection of labor rights in the 14 regions where it currently operates and to open inspectorates in the 15 regions where there currently are none. Additionally, inspectors call for their employer to respect their collective bargaining agreement, and judicial decisions that would provide a bonus for inspections. The Solidarity Center works with SUNAFIL and the two labor inspectors’ unions to train workers about how labor inspections can help achieve stronger enforcement of worker rights.

The Ministry of Labor and Employment Promotion and SUNAFIL have come under scrutiny for their decision to halt a program to inspect small informal enterprises, like those found in Nicolini.  On June 27, Minister of Labor Alfonso Grados testified before the congressional labor committee about the government’s role and responsibility in preventing tragedies like this one. The International Labor Organization’s office for the Andean region decried the use of forced labor in Peru, calling for all parties to abandon their indifference and join the fight to end all unacceptable forms of work in Peru and around the world.

“The labor inspectors and the young men and women working at JPEG SAC, while worlds apart in terms of education and life opportunities, are connected in the web of common humanity. When one group improves their conditions, they will be able to help the other group come out of darkness, out of danger and into the light,” said Tate. “Once we begin to recognize and act upon our connectedness, and make policies and budget decisions oriented by this respect for human life, then, and only then, will we know that there will be no more Nicolini tragedies.”

More than 200,000 workers toil in slavery-like conditions similar to the victims of the Nicolini fire, without labor rights or the information that would help them defend their rights. Seventy percent of Peruvian workers labor in the informal sector, most without contracts, social benefits, family-supporting wages or health and safety training and protection.