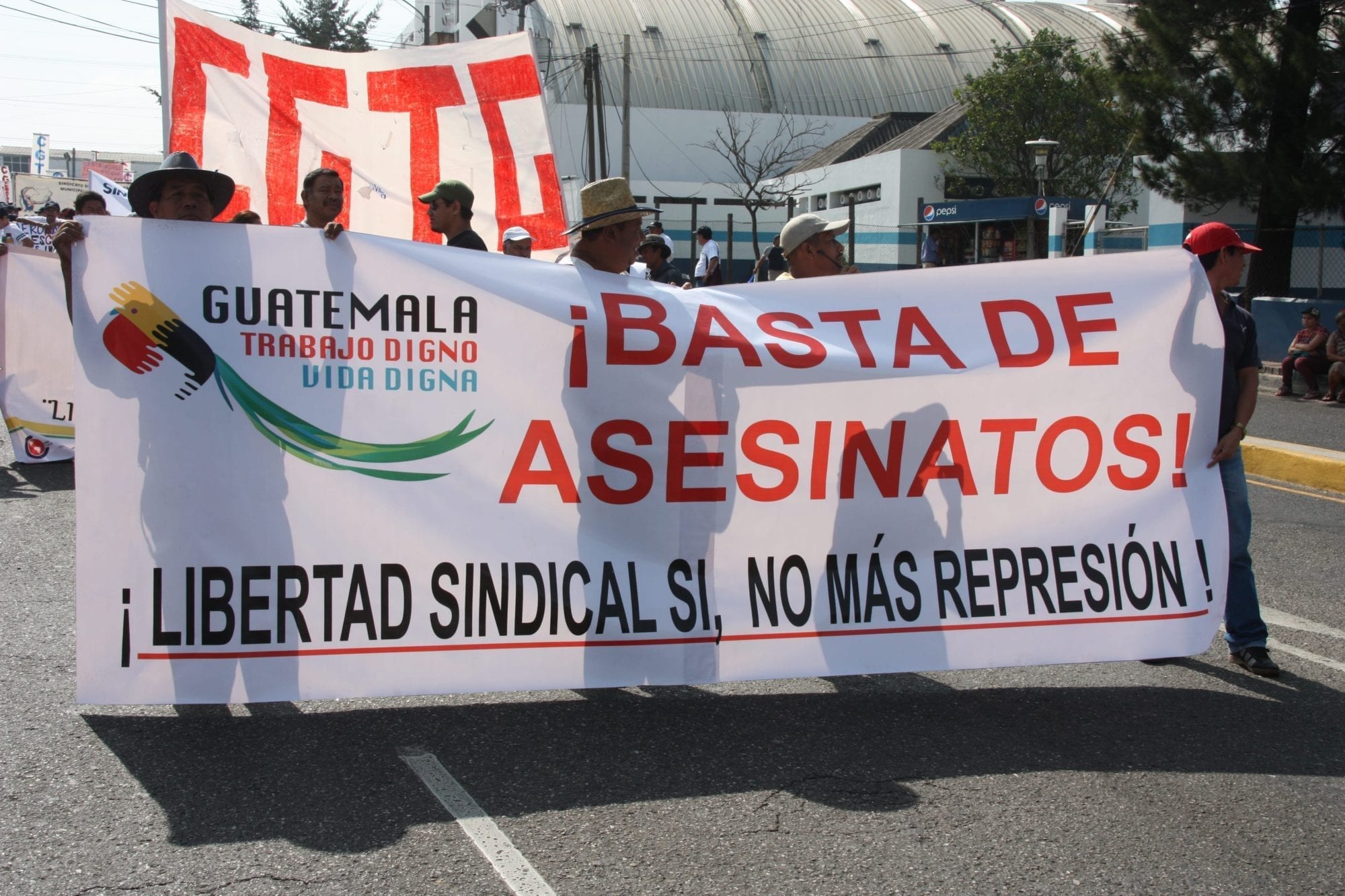 Threats, including death threats, and intimidation were the most common forms of violence against union activists and workers seeking to form unions in Guatemala last year, according to a new report by the Network of Labor Rights Defenders of Guatemala (REDLG). (Read the full report and the Executive Summary in English.)

Several union activists were targeted with death threats in 2019, including Damaris Jiménez and Edgar Chiguichón, leaders of an organizing committee to form a union at a maquila, according to the 2019 Annual Report on Anti-Union Violence. Union leader Hector Reyes also received a death threat indicating he should resign from his job and end his efforts to form a municipal union in San Diego, a city in Guatemala’s Zacapa Department. Two other maquila union leader also received death threats.

REDLG, a Solidarity Center partner, has documented and verified 26 cases of anti-union over the past year. But these numbers represent severe underreporting. Fewer than half of survivors of anti-union violence in 2019 say they formally denounced the incidents “before a competent authority.”

Among the recorded cases, the most frequent was “criminalization,” or using the criminal justice system “for halting the work of a defender.” In some cases, criminal denunciations against a labor unionist are fabricated to prevent the accused from pursuing union work while challenging the charges, according to the report.

In other cases, the intention is to ensure a labor activist is imprisoned to completely halt the individual’s union activity—“that is, the criminal system or other punitive methods are used to discredit or hinder the defense of rights,” according to the report.

Guatemala is consistently ranked among the countries with the world’s worst worker rights, according to the new International Trade Union Confederation’s 2020 Global Rights Index. “The pervasive climate of repression, physical violence and intimidation against workers and trade unionists” is made worse by the government’s “failure to pursue the many historic cases of murders and other violent crimes,” according to the Global Rights Index. Since 2004, the year the CAFTA-DR free trade agreement was signed, 101 trade unionists have been murdered in Guatemala, according to the International Labor Organization and the REDLG.

The Anti-Union Violence Report, which seeks to show that “anti-union violence is a complex social occurrence in Guatemala, of which we are far from knowing its depth,” points out that domestic violence and other forms of gender-based violence are rarely reported and in fact may sometimes be directed at women for their involvement with unions. “This type of violence can be normalized and go undetected,” according to the report, which points out that vulnerable groups such as members of the LGBTQI+ community, Indigenous people and persons with disabilities also are targets of such unreported anti-union violence.

The report situates the struggles by workers to form unions within the country’s larger economic challenges, including vast poverty affecting those with jobs who do not earn enough to support themselves and their families. Some 70 percent of all workers are in the informal economy, selling food in markets, driving taxis and cleaning homes. Yet for the first time in 10 years, the government last year did not raise the minimum wage in any job sector. The government also issued a decree that sought to create jobs in the formal economy with lower benefits than allowed by law and wages lower than the minimum, a move unions in part successfully countered.