Two union leaders in Honduras were murdered in 2019, and dozens more physically attacked, threatened and harassed for their activism in advocating worker rights, according to the just-released report, The Price of Defending Freedom of Association: A Report on Anti-Union Violence in Honduras. (Read the report in Spanish.) 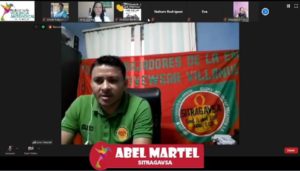 Published by the Network Against Anti-Union Violence, the fourth annual report provides detailed case studies, including the murders of Joshua Sánchez, a maquila worker and member of the Workers’ Union of Gildan Villanueva S.A. (SITRAGAVSA), and Jorge Alberto Acosta, executive committee/board member of the agricultural Workers’ Union of the Tela Railroad Company (SITRATERCO). The Network released an online presentation of the findings via Facebook Live.

Acosta was murdered despite requesting the government provide protection, and his assassination drew international condemnation and a global petition to Honduras President Juan Orlando Hernandez demanding his assassins be brought to justice. As U.S. Rep. Pramila Jayapal tweeted: “The murder of Honduran trade unionist Jorge Alberto Acosta is a tragedy, and part of a disturbing trend against the trade union movement in the country.”

Between 2009 and 2019, at least 36 trade unionists were killed in Honduras. More than 97 percent of the cases of violence against human rights defenders in Honduras go unpunished.

Most of the violence in Honduras last year, including Sánchez’s murder, took place as unions and human rights groups protested measures to cut the country’s health and education budgets. Unions, professional associations and teachers in 2019 joined together to form the Platform for the Defense of the Right to Health and Public Education, which held rallies across the country to urge funding for these key social programs.

Six out of 10 Hondurans live in poverty (62 percent), while four out of 10 live in extreme poverty (38 percent). The vast majority work in the precarious informal economy jobs like market vending and domestic work, where they are paid low wages and have no social benefits like paid sick leave or pensions.

The most common violence recorded was harassment, according to the report. For instance, union leaders report being followed and photographed after attending union meetings by individuals unknown to them.

To address the ongoing violence against workers, the Network, a Solidarity Center partner, championed creation of an international body to investigate crimes against trade unionists and offer state security protection. As a result, the International Labor Organization (ILO) established an Inter-Agency Commission on Anti-Union Violence which was launched in August 2019. Yet so far, the commission “has not managed to meet any of its objectives which are to protect victims or to encourage the Justice System to promote criminal investigation and reduce impunity,” according to the Network.

The report also describes the Network’s creation of a new campaign, with Solidarity Center support, to ensure union collective bargaining agreements represent a gender perspective and its efforts to draft proposals to amend trade union statutes to ensure the equal participation of men, women and the LGTBI community.