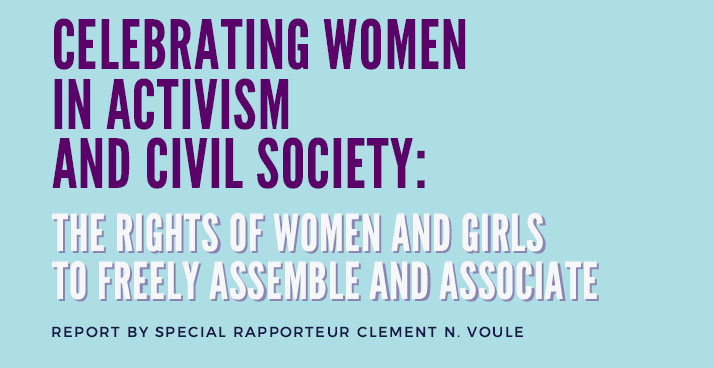 Women activists and their organizations are the drivers of positive change worldwide—and the freedom to form unions and freely associate is key to their ability to do so, according to a report released today.

“Celebrating Women in Civil Society and Activism,” prepared by Clément Voule, United Nations special rapporteur on the rights to freedom of peaceful assembly and of association, finds these fundamental freedoms empower women to “express their political opinions, engage in … economic and social activities … form and join trade unions and cooperatives, and elect leaders to represent their interests and hold them accountable.”

Yet women’s voices are undervalued, the report states, even as government, employers and others violate women’s rights, with many women experiencing an increase in severe violations of these fundamental freedoms and backlashes against gender equality. Exclusions from labor laws, barriers to forming and joining unions and reprisals for labor organizing leave women with “little leverage to change the conditions that entrench poverty, fuel inequality and limit democracy.” 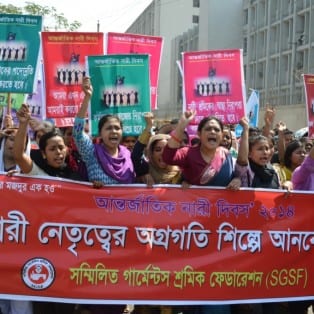 Women’s exclusion from labor laws and reprisals for forming unions in Bangladesh and around the world limit women’s ability to improve their workplaces. Credit: Solidarity Center

For instance in Bangladesh, “in many cases when garment workers want to unionize, they are blacklisted, intimidated, local groups threaten their families and many women are subject to physical assault,” says Nazma Akter, Awaj executive director and president of the Sommilito Garments Sramik Federation (SGSF). “There is no robust legal mechanism to appeal to for the right to organize and to help protect our human rights.”

Women seeking to improve their working conditions face similar challenges around the world, including in Ghana, where women “often are threatened with dismissals or non-renewal of contracts,” say Edward Kareweh, general secretary of the General Agricultural Workers’ Union (GAWU) and GAWU Gender Equality Officer Bashiratu Kamal. “There is a lack of cooperation from government in enforcing laws against discrimination, marginalization and exploitation.” 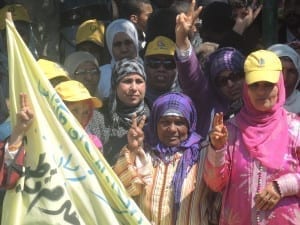 Agricultural workers in Morocco and around the world often are not covered by their countries’ labor laws, a lack of rights that falls especially hard on women. Credit: Solidarity Center/Hind Cherrouk

In El Salvador, “the ability to form and join unions is a constitutional right, but in practice, there are many obstacles, ranging from delay in legal registration, defamatory campaigns, loss of employment, widespread violence, to murder in certain cases, says Marta Zaldaña, Secretary General of the union federation FEASIES.

“Tunisia’s Constitution guarantees equality and equal opportunities for men and women. But despite those important laws, the actual problem is in implementing those laws, especially in the interior regions where male domination prevails,” according to a Tunisian woman union activist.

Nazma, Kareweh, Kamal, Zaldaña and the Tunisian activist were among hundreds of worker rights and human rights activists whose testimony informed the report, which Voule is presenting this week to the UN General Assembly. SGSF, GAWU and FEASIES are Solidarity Center partners.

The ability of women to freely take action is especially critical now, as the COVID-19 pandemic has worsened the inequalities facing women, in their jobs, homes and communities.

“Faced with narrowing civic space, mounting inequalities and rising fundamentalisms, women have persisted in their fight for structural change, speaking truth to power and building resilience in their communities,” the report states.

Gender-based violence and harassment is “perhaps the fiercest form of reprisal to the exercise of the rights to freedom of peaceful assembly and of association for women workers,” the Special Rapporteur finds. 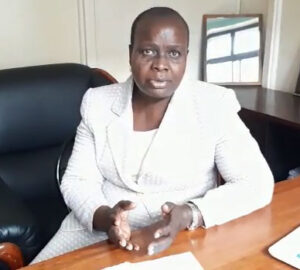 “Gender-based violence against women at work has been on the rise in various places in Kenya. Violence also is used as a way of discouraging women from actively participating in unions/associations and seeking leadership positions,” says Rose Omamo, general secretary of the Amalgamated Union of Kenya Metal Workers, a Solidarity Center partner.

“There have been protests against rape and abduction of young girls by terrorists, femicide, sexual harassment in markets and gender-based violence and harassment in the world of work. Some of the women who participated faced … gender-based violence attacks ranging from bullying, sex discrimination to loss of jobs, threats to life and social stigmatization as a result of speaking out or standing up to push for an end to GBVH at home, workplace, their unions and communities.”

Women Must Be Part of the Solution 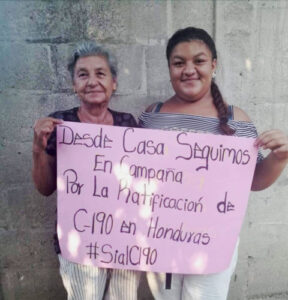 In Honduras, union activists are posting photos of themselves on social media with signs urging passage of C190. Credit: Promotoras Legales

In recommending steps to address violations of women’s rights to freedom of peaceful assembly and association, the report emphasizes the actions “should be grounded in supporting and empowering women’s movements and organizations in all their diversity.”

Governments must ensure adherence to international treaties addressing women’s right to a voice at work and in their communities, Voule said, speaking on a panel today with Solidarity Center Executive Director Shawna Bader-Blau and other civil society leaders. Among its recommendations, the report urges governments ratify International Labor Organization (ILO) Convention 190, which covers gender-based violence and harassment at work, and ILO C189 which recognizes domestic workers’ right at work.

Employers also “have a direct responsibility to respect and protect women’s rights to freedom of peaceful assembly and of association, to act with due diligence to prevent the violations of such rights and to provide women with effective remedies for violations connected to their operations,” the report states.

“Celebrating Women in Civil Society and Activism” builds on the 2016 UN Special Rapporteur report on workers rights that found workers rights—and the freedom to form unions and freely assemble—are key to achieving human rights because without assembly and association rights, workers have little leverage to change the conditions that entrench poverty, fuel inequality and limit democracy.