A Safe Space for Women Workers on the Job 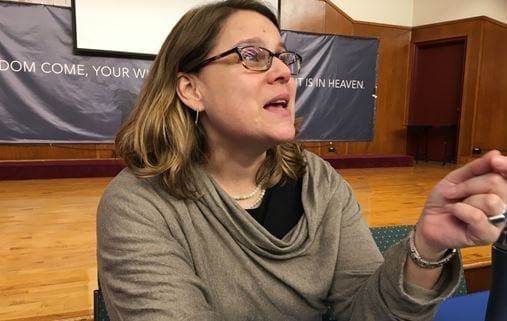 Highlighting the importance of addressing violence against women in the workplace, Solidarity Center’s Robin Runge, senior specialist for gender inequality and inclusion, today was interviewed by Jason Vorderstrasse, deputy director of the State Department’s Office of International Labor Affairs, to mark the global 16 Days of Activism Against Gender-Based Violence campaign.

Gender-based violence (GBV) is one of the most prevalent human rights violations in the world, said Runge, and the Solidarity Center’s experience with low-wage women workers in Cambodia, Mexico and Morocco provides promising best practices for addressing gender-based violence at work.

“We’ve learned,” she said, “that by providing a space and opportunity for women workers to come together and discuss what they have been experiencing… [women] are able to elevate these issues in their workplace.”

As one example, Runge describes the “phenomenal success” of a series of leadership trainings for women agricultural workers in Meknes, Morocco, which allowed workers to negotiate language for a collective bargaining agreement that “allowed women to really feel safe and be more productive in their workplace.

“I can’t say enough how important it is for the workers to have that space to talk about what they are experiencing and then have those conversations lead to talking with their employer about creating safe spaces in that workplace,” Runge said.

The archived interview can be found here.

The interview was prompted by the annual global campaign to end violence against women and girls, “16 Days of Activism against Gender-based Violence,” which ends on December 10—16 days after the International Day for the Elimination of Violence against Women.

The Solidarity Center and allies throughout the international labor, human and women’s rights communities are campaigning for an International Labor Organization (ILO) convention to stop violence and harassment at work.