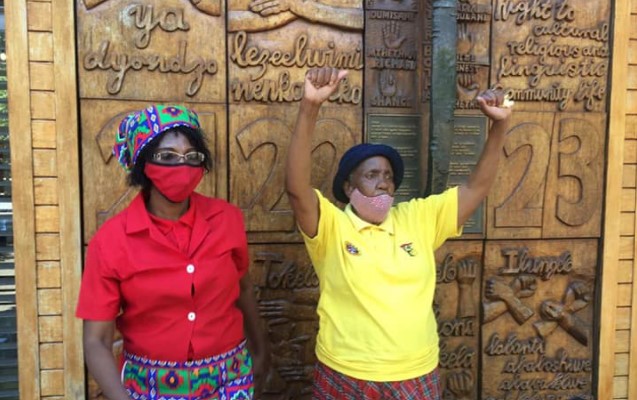 Domestic workers celebrate a historic judgment by the South African Constitutional Court in mid-November 2020 that injury and illness arising from work as a domestic worker in a private home is no different to that occurring in other workplaces, and therefore equally deserving of compensation. Credit: SADSAWU

On June 16 International Domestic Workers Day, domestic workers are celebrating a landmark legal win by South Africa’s domestic workers for colleagues who die or are injured in their employers’ homes. For the first time, starting this year, domestic workers who suffer injury on the job are eligible for compensation for temporary and permanent disability, medical expenses, funeral costs and survivor benefits.

Until last year, South Africa’s approximately 1 million privately employed domestic workers suffered deaths and crippling injuries without access to compensation for themselves or their dependents because domestic workers were excluded from South Africa’s Compensation for Occupational Injury and Illness Act (COIDA). With Solidarity Center support, the South African Domestic Service and Allied Workers Union (SADSAWU) and human rights organization Socio-Economic Rights Institute of South Africa (SERI) litigated and won a long-denied claim for the dependent daughter of Maria Mahlangu, a privately employed and partially sighted domestic worker who had fallen into her employer’s swimming pool and drowned in 2012. The historic judgment, made by the South African Constitutional Court in mid-November, recognized that injury and illness arising from work as a domestic worker in a private home is no different to that occurring in other workplaces and thus equally deserving of COIDA coverage.

The unions and SERI continue to press the government for more time for domestic workers to submit claims and increase retroactivity. “We must remain that beacon of hope for workers,” says Witbooi.

Ten years after the adoption of an International Labor Organization (ILO) Convention confirmed their labor rights, domestic workers across the globe are still fighting for recognition as workers and essential service providers, as documented by a new ILO report. And, although 32 countries have ratified Domestic Workers Convention 189, and 29 have entered the convention into force, most of the world’s 75.6 million domestic workers are still being denied social protection rights, including access to national health insurance, pension schemes and compensation funds.