‘The Key to Development in Africa Is Empowering Women’ 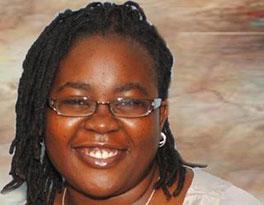 Up to 80 percent of workers across Africa labor in the informal economy, many as street vendors, taxi drivers and domestic workers. With few legal rights, most informal-sector workers make low wages and have no health care or other social protections.

Because women comprise the vast majority of workers in the informal economy, they are integral to improving wages and working conditions for all informal workers. Indeed, says Caroline Mugalla, executive secretary of the East Africa Trade Union Confederation (EATUC): “The key to development in Africa is empowering women.”

Mugalla traveled to Washington, D.C., in August, where she and nearly 40 African trade union leaders met to ensure participants in the high-level U.S.-Africa Summit included “decent work” on their agenda. Although “Africa rising” has become a popular catchphrase for the continent’s economic momentum, only the top 1 percent are benefiting. Most Africans are unable to secure decent work—which includes good wages, safe working conditions and the freedom to form unions and collectively bargain.

For many unions, the first step to empowering women workers is addressing their own power structures, a process Mugalla led for several years within the EATUC, a regional confederation that includes labor federations in Burundi, Kenya, Rwanda, Somalia, Tanzania, Uganda and Zanzibar. EATUC’s constitution was “silent on the issue of gender,” Mugalla said, so in 2009, she and others began drafting language to ensure gender equality became a key part of it.

Over the next three years, union leaders hosted regional committee meetings with women to hear their concerns and develop recommendations for the EATUC governing body. The International Labor Organization (ILO) and Solidarity Center held leadership trainings for women and assisted union leaders in crafting new language for the constitution. The union women also held the all-male general secretaries accountable for approving it, says Mugalla.

Now with passage of the new constitution, Mugalla says “women need to be trained at the shop floor so they can become leaders—stewards, regional officers, national officers.”

In reaching out to workers in the informal economy, unions in East Africa provide an opportunity for women to share in the region’s prosperity. Tanzania unions have organized female street vendors who sell beads, sandals, wood carvings and other crafts, providing them with valuable information on the market price for their goods. “Women make up the majority in East Africa, make up the majority of people living below the poverty line,” says Mugalla. “A woman who is economically empowered can made decisions on her own.”

As a collective trade union voice in East Africa, EATUC is pressing for strong worker protections in trade agreements such as the African Growth and Opportunity Act (AGOA). AGOA, which gives eligible sub-Saharan countries duty-free access to the U.S. market for a variety of products, is up for re-authorization in 2015. In the 15 years AGOA has been in effect, it has increased exports from sub-Saharan Africa, but by focusing mostly on tariff reductions, it has not spurred broader development or fostered a robust and equitable economic system, Mugalla says.

AGOA covers products made in the textile sector, which is nearly entirely composed of women workers. The EATUC is working to ensure AGOA and other such agreements do not increase the number of low-skilled jobs but provide women and young workers “employment that gives them the opportunity to access social services, job security,” says Mugalla.

Empowering women economically, fundamental to advancing progress across Africa, can only happen when gender equality is recognized across the board. Or as Mugalla says:

“The day that gender becomes a man’s issue is the day we have made a lot of progress.”