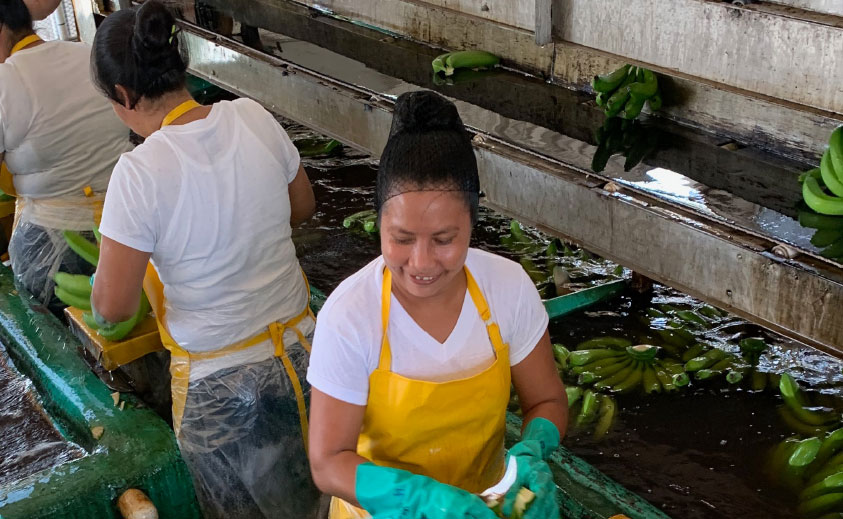 Unionized workers on Guatemala banana plantations earn more, work fewer hours, face less sexual harassment, and have safer workplaces, including during the Covid-19 pandemic, according to a Solidarity Center report. (The report also is available in Spanish.) 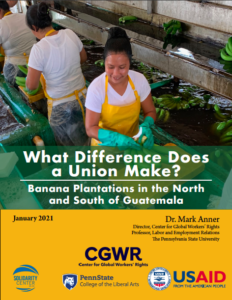 Working conditions are very similar to modern slavery at the two-thirds of Guatemalan banana plantations not unionized, said César Humberto Guerra López, national secretary of labor and conflicts for SITRABI (Union of Banana Workers of Izabal). “The Labor Ministry and the courts are guardians of business interests, they are not on the side of the workers.” Guerra spoke at a Solidarity Center panel event yesterday to discuss the report’s findings. (Watch the full event here.)

While plantation workers in the North on average are paid $2.52 an hour, those along the Pacific Coast in the south are paid $1.05 an hour, said Mark Anner, director of the Center for Global Workers’ Rights and professor of labor and employment relations at Pennsylvania State University. Anner is author of the report, which surveyed 210 workers between September 2019 and March 2020.

“Workers without trade unions around the world, and Guatemala in particular, have lower paying jobs, more dangerous jobs, jobs with abuse and fewer rights,” said Solidarity Center Executive Director Shawna Bader-Blau in the panel’s opening remarks. “So what difference does a union make? It makes all the difference to workers in Guatemala.” 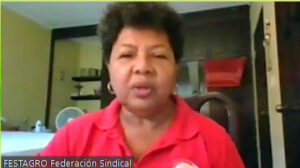 Irís Munguía discussed the challenges women on banana plantations face when they don’t have a union to advocate for their rights. Credit: Solidarity Center

“If a woman reports someone who is harassing her, that woman could be fired. Because he’s the boss and we are the workers,” Irís Munguía said, speaking through a translator. Munguía, women’s coordinator of the Honduran Federation of Agro-industrial Unions-FESTAGRO, was the first woman coordinator of COLSIBA, the Latin American coordinating body of agricultural unions.

The report cites Carmen, a SITRABI union leader, who says sexual harassment and other forms of gender-based violence are much lower in unionized facilities because unions hold employers accountable. “If a man touches me, I can inform the company. Managers have been fired [for sexual harassment]. There is more respect now. And if someone doesn’t respect us, the issue goes to the union-management committee.”

Workers have not formed unions in the south because “there is fear, panic to organize in a union,” according to Guerra. He said that when workers in the southern region last attempted to form a union in 2007, one union leader was killed and the daughter of another union leader raped, while other union activists received threats. “The consequences of fear continue to be very palpable for the workers,” he said.

Anner said his research found that between 2004 and 2018, 101 union activists were killed in Guatemala for trying to form unions and achieve decent work. The majority of those murders took place in the Southern part of Guatemala, in the regions where non-union banana plantations have expanded in the last two decades.

With no unions to champion worker rights, banana plantations and packing plants in the south do not comply with laws limiting working hours, regulating wages or ensuring safety, Guerra said. Workers labor 12 hours a day, Monday through Saturday.

Agricultural and production facilities have moved work to the south to pay the lowest wages. As the report makes clear, the root causes for the push for low wages goes to the top of the supply chain. “Fruit companies no longer wield power in the production process, that power is slowly being displaced by mega supermarkets that constantly look for ways to squeeze prices,” the report says.

“Wal-Mart requires such low prices that multinational corporations are pushing the directly owned facilities in the north to outsource to the south,” Anner said. And that means seeking out plantations in a nonunion region where wages are brutally low.

The report also finds that all production facilities that engage in worker rights violations have been inspected by private certification programs, including by Global G.A.P. and Rain Forest Alliance. “Management tells workers what to say to the certification inspectors before the inspectors arrive,” the report finds.

Guerra and Munguía, long-time union leaders who began working on banana plantations in their teens, shared their successes in helping workers achieve their rights through unions.

In the north, SITRABI has 17 negotiated collective agreements, and wages at one plantation, a Del Monte subsidiary, are three to four times higher than at non-union facilities, Guerra said.

Munguía described a landmark regional agreement COLSIBA negotiated with Chiquita that ensures zero tolerance for sexual harassment and gender-based violence at work. The agreement covers banana workers in Costa Rica, Guatemala, Honduras and Panama. The agreement shows “the importance and the great difference in belonging to the union and not being unionized.”

“Dignity on the job and just livelihoods—this is something we can reach only through union organizations,” Munguía said.

Joell Molina, Solidarity Center trade union strengthening director, moderated the panel. The report was commissioned by the Solidarity Center under the USAID-funded Global Labor Program and written by Center for Global Workers’ Rights/School of Labor and Employment Relations at Penn State University, is co-published by the Center for Global Workers’ Rights.