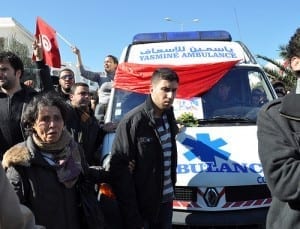 The Tunisian Labor Federation (Union Générale Tunisienne du Travail, UGTT) is holding a general strike today in response to the murder Wednesday of a popular political leader. Chokri Belaid, a respected human rights lawyer and leader of the Democratic Patriots party, a major partner of the opposition Popular Front, was shot dead by two unidentified gunmen as he left home on his way to work.

Thousands of Tunisians across the country have been taking to the streets to denounce this crime and an escalation of violence. Prime Minister Hamadi Jebali has called for the government to dissolve, a movenot entirely supported by his ruling Ennahda party.

In an emergency meeting following Belaid’s murder, the UGTT administrative council, the union’s highest body, called for a general strike in condemnation of the assassination. The strike will coincide with Belaid’s funeral, which is expected to draw tens of thousands of mourners.

A video posted on YouTube shows people calling openly for Belaid’s death. Opposition politicians in Tunisia report receiving death threats in recent days.The UGTT has been the target of violent attacks in recent months, including the June firebombings of trade union offices around the country. Since calling for a general strike, the UGTT General Secretary Hassine Abassi also has received a death threat.

The UGTT was recently honored by the AFL-CIO and received the George Meany–Lane Kirkland Human Rights Award for its key role in supporting and sustaining the Tunisia’s democratic revolution which, in January 2011, sparked what has become known as the Arab Spring.