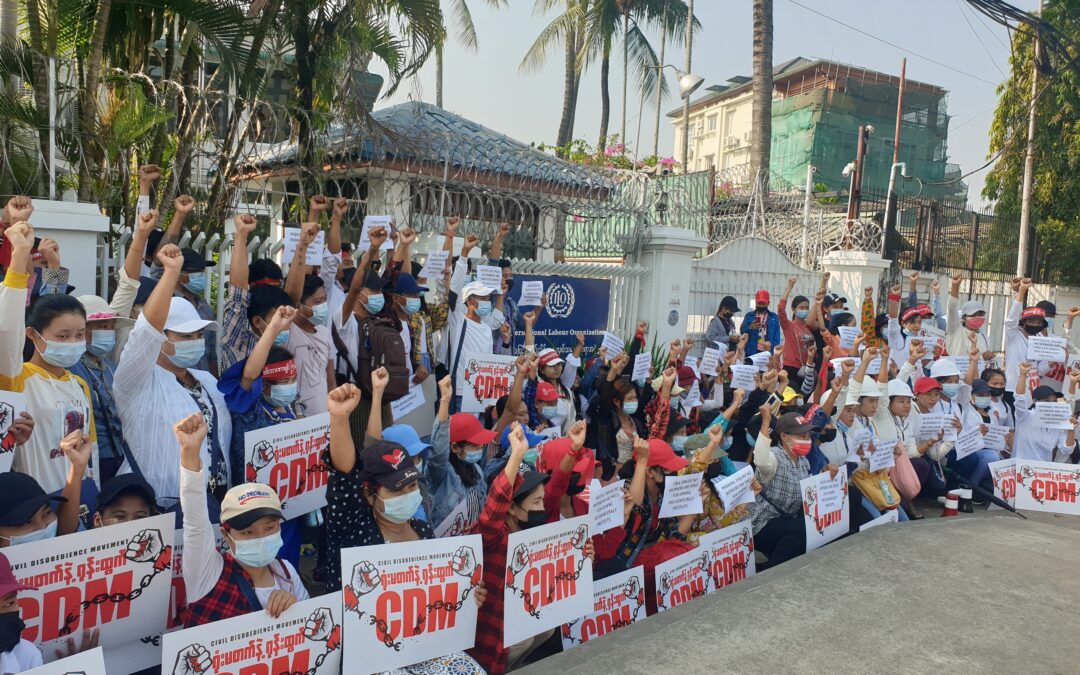 Union members have been in the forefront of pro-democracy rallies in Myanmar.

Two union leaders in Myanmar recently have been arrested for their participation in pro-democracy rallies, and unions worldwide are calling for governments to halt trade and other financial support that provide backing to the country’s military government. The total number of union leaders arrested since the February 1 military coup is at least 20, according to union leaders. (Support workers under attack in Myanmar.)

More than 750 people, including more than dozen union members, have been killed and at least 3,400 people arrested. Union members killed include Chan Myae Kyaw, a union activist and truck driver at a copper mine, who was shot dead while protecting other protestors during a peaceful rally.

Ma Myo Aye, leader of the Solidarity Trade Union Movement (STUM), was arrested at the union’s office in Yangon in recent days and taken to prison by the military. Union leaders say she is charged for allegedly violating Section 505a of the Penal Code, which makes it a crime to cause or intend to cause disobedience or disloyalty to members of the government. Her first court hearing is scheduled for April 29.

She has been transferred to Insein prison in Yangon, which union leaders say is notorious for its torture of prisoners. Myanmar media is reporting horrific sexual assault and other forms of torture against women imprisoned by the military.

Mi Aung, the finance officer of the Hmawbe Brick Factory Union, an affiliate of the Building and Wood Workers Federation of Myanmar (BWFM), was arrested by the army in Hmawbe, where she was visiting her family. Her whereabouts are unknown. The union is vowing to carry on the struggle for democratic freedoms.

The two leaders are among tens of thousands of union members who have taken a leading role in the nationwide Civil Disobedience Movement (CDM) to peacefully protest for an end to the military coup. Union offices have been ransacked and the military has conducted door-to-door searches for union activists, most of whom have now gone into hiding outside Yangon. Arrest warrants have been issued for at least 75 union leaders.

Garment workers–women in particular–have taken a leading role in the protests, with the country’s 450,000 garment workers especially active in organizing civil disobedience actions and shutting down factories.

In Hlaing Thar Yar, an industrial zone outside Yangon, factories are re-opening despite the dangers to workers. The Industrial Workers’ Federation of Myanmar (IWFM) says the military is arbitrarily stopping workers on the streets, demanding they give their phones to soldiers or face arrest. If they do not have phones, the military requires them to pay a fine. During CDM rallies, the military has killed more than 100 workers in the area, burning some alive, and factories also have been burned, according to the federation.

Yet if workers do not return to their jobs, IWFM says factory management is using their absence to lay off union representatives. Because the military regime cut phone lines and internet access, workers are unable to tell their employers they cannot return to work, and so lose their severance pay.

IWFM and the Federation of General Workers-Myanmar are asking multinational fashion brands to ensure workers can take unpaid leave if they request it because of the lack of safety, and to enable participation in peaceful pro-democracy demonstrations.

Unions around the world are pushing their governments to take immediate action by isolating the military junta and impose sanctions on the Myanmar Oil and Gas Enterprise (MOGE), which provides the military with crucial financing.

The global union movement also is urging international financial institutions to recall all projects and loans to the military government, and initiate dialogue with the National Unity Government, which includes leader Aung San Suu Kyi, who was among elected officials the military arrested.

A coalition of global union federations issued a statement conditionally supporting the Five Point Consensus statement by the Association of Southeast Asian Nations (ASEAN) in which the organization and Myanmar’s junta agreed to a plan to end violence and hold a constructive dialogue among all parties.

“A dialogue process will be meaningless if political leaders remain imprisoned and if trade unionists, activists and even health workers who assist the injured, remain at risk of arrest, torture and imprisonment,” the union federations say. “Trade unionists have been arrested, tortured and harassed in door-to-door searches, while others are hiding in fear. The military has imposed widespread restrictions on workers’ rights and curtailed freedoms of speech and assembly, blocked social media and declared 16 labor-related organizations illegal.”

Education International is urging the United Nations Security Council to take stronger action, including targeting military leaders, and asks national governments to use all means available to sanction the military, including through economic pressure.

In New Zealand, the Council of Trade Unions is pushing its government to not ratify the Regional Comprehensive Economic Partnership (RCEP) trade agreement because it includes trade with Myanmar. The Swedish union of forestry, wood and graphical workers called on the country’s Forest Stewardship Council to stop providing certifications to raw materials exported by Myanmar’s military junta.