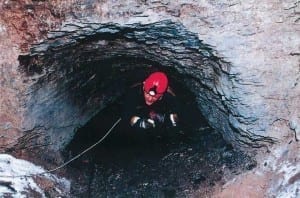 With few or no safety measures in place, Ukraine has the world’s highest coal mine deaths.

Freedom of association and the ability of civil society organizations to fully function in Ukraine are in jeopardy as the country increasingly moves away from democracy. Only international attention and solidarity have slowed these disturbing trends.

“There is constant pressure on non-governmental organizations (NGOs) from oligarchs, media, the security system and the courts,” said Mykhailo Volynets, chairman of the Confederation of Free Trade Unions of Ukraine (KVPU).

Volynets, who met with Solidarity Center staff in Washington, D.C., as part of a recent visit to the United States, described an environment of more subtle pressure against NGOs than practiced in Russia, where a new law passed in January severely restricts their operation.

Yet attacks on worker rights and the nation’s blossoming free trade movement have not been as subtle. A proposed labor code would legalize lockouts, allow unlimited work days and weeks, and enable employers to monitor workers at the workplace. The draft code is so ambiguous, said Volynets, “employers will always find a provision that is beneficial” to them. Further, workers and their unions have no recourse in the courts, because “90 percent of court rulings are so unfair, they side with the employers and authorities.

“The authorities are creating a situation in which civil society cannot develop. Specifically, unions can’t develop,” said Volynets, whose confederation is one of the few dynamic civil society organizations in Ukraine.

The KVPU, a Solidarity Center partner, has a strong presence in regions were few other progressive civil society groups have reach.

Worsening worker rights has resulted in a growing “shadow economy,” with 30 percent to 40 percent of wages paid off the books, Volynets estimates. Those who support themselves through such work will never have pensions, he says. In addition, some 30 percent of young workers under age 25 never have had a job, said Volynets, and their future is bleak.

Volynets, who also heads Ukraine’s Independent Trade Union of Miners, described the potentially deadly conditions in the nation’s nonunion mines, where miners work deep underground in areas that often lack structural support and have little or no safety measures in place. Volynets estimates some 50,000 Ukrainians labor in such mines. Ukraine has the world’s highest coal industry death rate. In 2011, 161 Ukrainian coal miners died in workplace accidents. Ukraine’s mining industry has become a major part of the national economy in recent years, accounting for roughly 4.4 percent of the country’s gross domestic product (GNP). The increasing difficulty workers face in forming unions means miners at these dangerous worksites have no collective voice to challenge unsafe working conditions.

Volynets, the 2004 recipient of the AFL-CIO George Meany-Lane Kirkland Human Rights Award and a former member of the Ukrainian parliament, also offered a measure of hope when he cited instances in which government efforts to restrict worker rights were rescinded after international union support. In the most recent example, a 2012 law that effectively prohibited much collective bargaining was rescinded after the KVPU filed a complaint with the International Labor Organization (ILO).