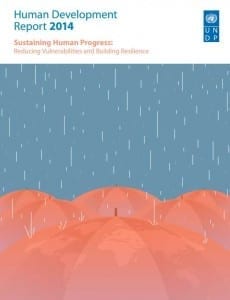 Full employment should be a policy goal for all countries, regardless of level of development, according to the latest United Nations Development Program (UNDP) report. The report emphasizes the importance of meaningful, decent work for developing a worker’s dignity and creating community cohesion.

“Sustaining Human Progress: Reducing Vulnerabilities and Building Resilience” also emphasizes that young people are especially at risk for unstable work because of lack of job experience and financial instability. Even employed young people are vulnerable, experiencing lay-offs and pay cuts during economic downturns. Despite the challenges, the report says, the growing youth population can potentially bring more educated and more productive workers into the economy.

According to the report, South Asia and sub-Saharan Africa have the highest rates of vulnerable employment—some 77 percent of the total workforce in 2011. The same regions have the highest rate of working poor. As far back as 1993, UNDP identified jobless growth, where output increases, but employment lags behind. In addition, even as productivity increased, workers’ wages remained fairly stagnant.

The report highlights South Africa among three countries experiencing improvements in equality of marginalized groups. Because apartheid left the workforce divided by race, leaving only unskilled jobs for minorities, the country introduced an Employment Equity Act in 1998. This act encouraged women and members of minority groups to participate in the workforce, reducing unemployment and poverty. The act, in conjunction with other more specific efforts, has helped change the racial distribution of South Africa’s workforce and included historically disadvantaged groups.

In a special contribution to the report, Juan Somavia, former director general of the International Labor Organization, says modern economic thinkers see work as “only” a production cost.

“Nowhere in sight is the societal significance of work as a foundation of personal dignity, as a source of stability and development of families or as a contribution to communities at peace,” he writes. Somavia then outlines his policy recommendations: living wages, respect for worker rights, gender equality, workers organization and collective bargaining and pensions, among others.

Stable, decent employment not only provides workers and their families with financial security but can also boost a sense of dignity and status within the community. Higher rates of female employment can also widely benefit communities, in part by changing the perception of the “value” of girls, increasing female education and reducing poverty.