Workers across Asia are taking to the streets this fall with protests against proposed World Bank policies that fall short of ensuring fundamental worker rights, like freedom of association and collective bargaining. 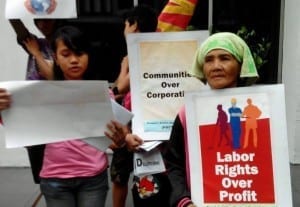 In July, the World Bank released drafts of its revised Environmental and Social Safeguard Policies, a set of guidelines aimed to ensure that World Bank-funded projects do not harm communities or the environment.

The proposed safeguards for the first time would include a section on labor. But unlike international finance institutions such as the European Bank for Reconstruction and Development, the World Bank would not require borrowers to adhere to International Labor Organization (ILO) core labor standards. Further, labor protections would extend only to workers employed directly by borrowers and exclude all employees of contractors or sub-contractors, who generally account for the vast majority of workers on World Bank-funded projects.

Other proposed safeguards also fall short. As the AFL-CIO notes, “there is no enforceable provision to protect human rights, troubling exceptions to protections for indigenous rights and no clear process or procedure for individuals and communities seeking redress if things go wrong.”

Although the World Bank is consulting with governments, corporations and some non-governmental organizations, activists say the most vulnerable people—such as informal economy workers and indigenous populations—have been left out of the discussions.

“Instead of creating safeguards that favor corporations, what we actually need are provisions that will empower and strengthen the bodies that make up the labor forces. We don’t see that in the draft that is being circulated right now,” said Edsil Bacalso, coordinator of NAGKAISA, a network of labor groups in the Philippines and a Solidarity Center ally.

During a World Bank meeting discussing the safeguards in Washington, D.C., this month, a coalition of activists advocating for workers, human rights and the environment presented a statement signed by more than 170 groups demanding the safeguards be strengthened. As Soumya Dutta from the Indian Peoples’ Science Campaign read the coalition statement, activists in the audience took off jackets to reveal t-shirts saying: “Safeguard people and the planet, not corporate profits and human rights abuses!”

Solidarity Center staff from Thailand, Indonesia and Washington, D.C., took part in a forum in September to help craft the statement’s section on labor. Worker rights activists say that if the World Bank adopts the safeguards as currently written, it would set off a cascading effect, spurring multilateral development banks to weaken their labor requirements for borrowers and harming workers.

Activists are holding rallies around the world, including in Bangladesh, India ad Japan, timed to coincide with World Bank meetings in each country on the proposed safeguards. The World Bank is seeking to present the final draft safeguards during its meeting next fall.