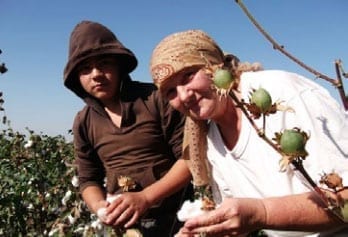 Uzbek human rights defender Elena Urlaeva has been detained against her will in a psychiatric hospital in Tashkent and the government should release her immediately, the Cotton Campaign said today. The Cotton Campaign is a coalition of worker rights and human rights groups that includes the Solidarity Center.

“Holding Elena Urlaeva in a psychiatric hospital without a clear medical rationale is a grave breach of medical ethics,” says Umida Niyazova, director of the Uzbek-German Forum for Human Rights (UGF). “She should be released immediately, and the Uzbek government must cease using hospitals as extrajudicial detention centers.”

Urlaeva for years has documented forced labor in Uzbekistan’s cotton fields, where some 1 million teachers, medical professionals and others are forced to toil during harvest seasons. She has been credited with helping significantly reduce child labor in cotton fields, and this month was among human rights defenders in Uzbekistan to receive the International Labor Rights Forum 2016 Labor Rights Defenders Award.

Urlaeva was detained last year after interviewing and photographing teachers forced by government officials to work in the cotton fields, and says that she was physically assaulted during the subsequent interrogation.

The International Labor Organization (ILO) has pushed the Uzbek government to end forced labor. Following a complaint by Uzbek civil society, the World Bank attached covenants stipulating its loans to Uzbekistan could be stopped and subject to repayment if forced or child labor was detected in project areas by ILO monitors contracted by the World Bank to carry out labor monitoring during the harvest. In March, members of the Cotton Campaign urged the World Bank to make good on its promise.

The Uzbek government has responded to global pressure to end forced labor by cracking down on Uzbek labor rights activists who monitor cotton harvests.

Uktam Pardaev, another Uzbek labor rights activist was jailed while he was monitoring last fall’s cotton harvest in Uzbekistan and now is serving three years’ probation at his home, where he is under constant surveillance by security services. (You can take action to help Pardaev.)

Also last fall, Uzbek human rights defender Dimitry Tikhonov reported that his home office was burned and all the equipment and documentation he collected on Uzbekistan’s use of forced labor in the country’s cotton harvestsm destroyed. No other room in his home was touched by the fire, he said. Tikhonov also was arrested and beaten by police as he took photos of some 20 busloads of teachers and school employees forced into the cotton fields for the annual harvest. Tikhonov has since fled the country.

The stories of all three Uzbek human rights defenders are featured in a video created as part of the Labor Rights Defenders Award ceremony, in which a voice-over points out that “the Uzbek government treats them as enemies of the state because of their peaceful human rights activities.”