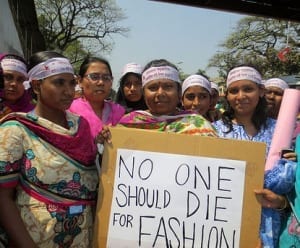 Hundreds of workers from multiple garment factories rallied in recent days at the National Press Club in Dhaka, Bangladesh, where they formed a human chain and demanded equal wages, equal rights and equal dignity for woman workers in the ready-made-garment (RMG) sector. The action was among many around the world throughout the past week as women workers and their allies commemorated International Women’s Day, held annually on March 8.

In Chittagong, where workers from 16 garment factories marched and rallied, Bangladesh Independent Garment Union Federation (BIGUF) Chittagong President Nomita pointed out that nearly all who took part were women.

• In Tunisia, the Union Générale Tunisienne du Travail (UGTT) held a solidarity march for Palestinian women and repressed women around the world. The March 8 event took place on the main avenue in Tunis, the capital, and concluded at the UGTT center with music, cultural activities, poetry and an exhibit on the history of women’s activism in Tunisia. The event followed a roundtable on a comparative study of women’s rights in the country’s three constitutions.

• Moroccan union activists and members of the Confederation Democratique du Travail (Democratic Labor Confederation, CDT), took part in trainings that covered women’s legal rights and they also held artistic and cultural events, concluding with a ceremony honoring social activists and retired women. The Union Marocaine du Travail (Moroccan Workers’ Union, UMT) combined a celebration of Women’s Day with events marking the 59th anniversary of its founding congress. Later this month, UMT will host a roundtable discussion on the role of women in the union and strategies for broadening women’s participation in the union.

• The Border Committee of Women Workers (Comité Fronterizo de Obreras, CFO) held a mini-workshop for women participating in the Solidarity Center’s Gender and Women’s Empowerment for Action program in Coahuila, Mexico. The discussion focused on how International Women’s Day is more than a time for women to receive feel-good gestures like a flower or nice words on Facebook from the men in their lives. In Mexico, where women disproportionately bear the brunt of the country’s economic and social insecurity and violence, Women’s Day offers a space for women and girls to evaluate how far they’ve come and how much further they still must go to win equality with men and boys and achieve justice in all areas of their lives.

In Liberia, women and their allies held a parade to the United Workers Union of Liberia (UWUL) office, where they raised flags in recognition of labor partner organizations such as the United Steelworkers and IndustriAll that implement programs to help female unionists to become a strong force in Liberia.

• Across South Africa, the Solidarity Center joined with Labour for Rights for Women (LRW) campaign and the Labour Research Service (LRS) to host two events. In North West Province, the organizations convened health care workers, farm workers and domestic workers in a meeting with local civil society organizations and the South African Department of Health to discuss the impact of a new government health insurance plan, especially its impact on women workers. In Limpopo Province, the LRW held a training session for union gender coordinators, organizers and negotiators on maternity protection. The LRW, sponsored by the International Trade Union Confederation (ITUC), brings together South Africa’s labor federations to support improved respect for women’s rights at the workplace and their greater participation in union activities