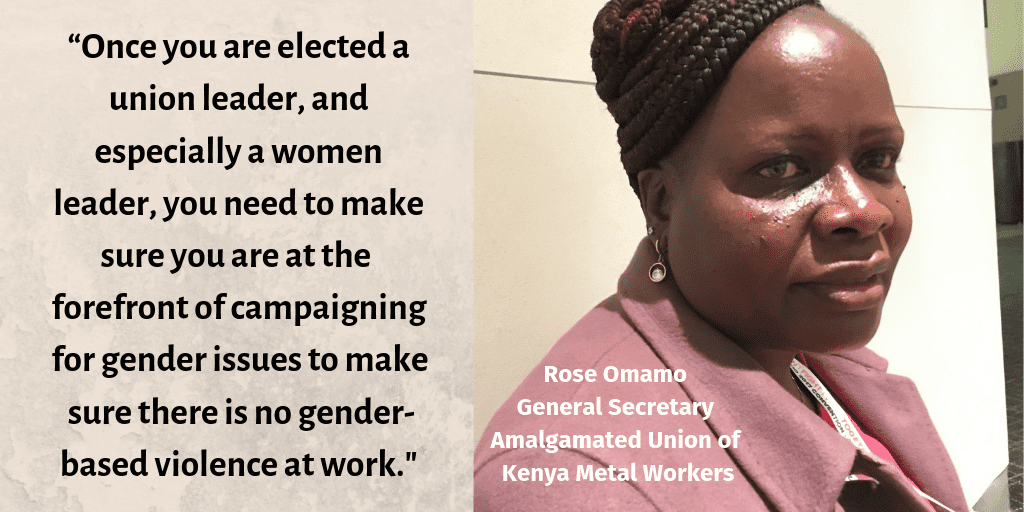 As the international community celebrates March 8, International Women’s Day, Kenya union leader Rose Omamo is meeting with union leaders and government officials across Africa to help propel passage of a proposed global standard that would address gender-based violence at work.

The convention (standard) under consideration by the International Labor Organization (ILO) would end violence and harassment in the workplace. Workers and their unions are championing its adoption with a strong focus on gender-based violence and harassment. Released last week, the most recent draft language of the proposed instrument, “Ending Violence and Harassment in the World of Work” builds on high-level talks in early 2018 among representatives of workers, government and business. 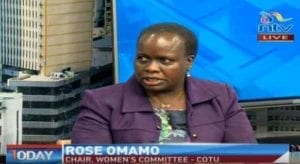 “We believe we will be able to convince the governments and even some of the employers to support the convention,” says Omamo, general secretary of the Amalgamated Union of Kenya Metal Workers and national Women’s Committee chair of the Congress of Trade Unions–Kenya (COTU-K), a Solidarity Center partner.

In June, representatives of workers, government and business will negotiate final language on a binding convention and recommendation at the International Labor Conference (ILC).

“Our job is to lobby, lobby, lobby and make sure we get support,” says Omamo, who will be among worker representatives at the ILC discussions. She will be joined by union leaders from other Solidarity Center partner unions, including Eulogia Familia, vice president of the Confederación Nacional de Unidad Sindical (National Confederation of Labor UnionUnity, CNUS) from the Dominican Republic, and Fiona Gandiwa Magaya, coordinator of the Zimbabwe Confederation of Trade Unions (ZCTU) Gender Department.

Unions around the world took the lead in spearheading the multi-year effort to secure passage of an ILO convention covering gender-based violence at work, with the Solidarity Center taking a key role in helping and supporting unions in leveraging their collective power. Unions, through which workers can take collective action to overcome barriers to preventing and addressing gender-based violence and harassment at work, are especially well-positioned to take the lead on this issue, says Solidarity Center Senior Gender Specialist Robin Runge.

Workers and their unions are seeking a definition of violence at work in the final convention that would encompass transportation to and from work, an area in which employer groups are resisting. But Omamo believes it is imperative to include the time in which a worker commutes.

Other issues include ensuring the final convention encompasses broad definitions of who is covered and what constitutes “violence and harassment.”

The International Trade Union Confederation (ITUC), which has helped coordinate and guide the campaign to end gender-based violence at work, offers information and tools to assist unions and organizations in taking action.

Omamo and her sisters have been working doggedly over the past year to create awareness of and build support for passage of the convention. Omamo has traveled across Kenya to educate union members, such as engineers in glass, metal and petroleum, about the draft proposal.

As a representative on the gender commission of the Organization of African Trade Union Unity (OATUU), Omamo has met with government officials in Uganda and elsewhere to push for their support of the convention. In April, COTU-Kenya is hosting a meeting of women union unionists from the 18 OATUU member countries who will share input from their discussions with government officials, so the group can determine the level of government support for the convention and identify potential stumbling blocks going into the June ILC meeting.

When meeting individually with government leaders, Omamo says she describes the far-reaching consequences for workers experiencing sexual harassment and other forms of gender-based violence at work. “Some people even leave jobs because of the kind of harassment they go through at work—not because they don’t want to work, but because the bosses they have are sexually harassing them,” she says.

“Once you are elected a union leader, and especially a women leader, you need to make sure you are at forefront of campaigning for gender issues, make sure there is no gender-based violence at work, and make sure women are working in a safe environment,” says Omamo, who became the first woman to lead her 11,000-member union.

“This is a convention is very close to our hearts.”