Workshop – Allies and Partners: Role of Men in Women’s Empowerment and Gender Equality in Trade Unions

Allies and Partners: Role of Men in Women’s Empowerment and Gender Equality in Trade Unions 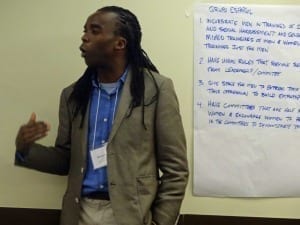 Nhlanhla Mabizela: Unions must look at policies and determine if they include women. Credit: Tula Connell

Mabizela posed a series of questions for workshop participants to discuss in small groups: Nhlanhla Mabizela began by describing the experience that led to his becoming a gender activist. One day as he walked by a group of nearly naked children playing on the street with no parents, he asked himself, “What kind of mother would leave her children in the streets?” Further down the road, he saw a group of men sitting around a fire, ignoring the children, and his question changed to: “What’s wrong with men? Are we that emotionless?” Mabizela wanted to be different from this male model.

• What can be done to build men’s sense of responsibility?
• How do we begin to address gender inequality, especially from the perspective of men?
• How do we, as men, begin to create those spaces for women?
• What is the benefit to men? That is, Mabizela said, “if I ask myself as a man, what is it that I’m going to be benefiting from by bringing in women? There are benefits, but we don’t want to think about them? We can’t even think about our privileges?”

He noted the major question is the implication for men for giving up spaces of privilege.

Participants broke out into four groups to discuss and then reported their conclusions.

Group 1:  Women should not waste a lot of time being behind men when men are not supporting women. Women need to be proactive—if men don’t take responsibility, women shouldn’t wait for them. Women create a challenge for men when they take action, are constructive, don’t argue and show men that women are capable of achieving results.

Group 2:  Women trade unionists should seek allies among men, seek out an individual who seems sympathetic, speak to him outside the union, then speak to two or three more men, and then these men will go back to the group and begin to sow the seeds for change.

Group 4: Include men in trainings on gender and gender violence. Hold mixed and single sex trainings so men can be more open in all-male groups. Set rules so that any union leader involved in sexual harassment is removed from positions of power. When creating committees, ensure they are equally composed of men and women.

Mabizela then highlighted the point about making allies with men. Patriarchy “oppresses women, but oppresses men as well.” Mabizela also discussed the need to educate children, offering the example of HIV training at a union that also involved the children of union members. He discussed a series of three-day gender awareness workshops he held and noted how it was necessary for male participants to make a conscious effort to break out of well-worn patterns. For instance, he said, men at the bargaining table couldn’t understand why they needed paternity leave. Because short-term workshops are not sufficient, he also holds longer “awareness camps.” Gender inequality is “not something we can (instantly) correct,” he said. “It’s a process we need to take people through.”

Society needs to be changed as well, Mabizela said, pointing to the example of a man walking into a health care clinic and seeing only women and children and so sees no role for himself. Further, he said, “if we are just looking at the issue of quotas, we’re doing ourselves a disadvantage.” Unions must look at their policies, determine if they involve women.

In conclusion, Mabizela said it is important for men to be conscious and aware of “what I do, whom I talk to and the words I use.” As a facilitator of gender workshops, Mabizela said he doesn’t come with a solution. “I come to listen so to be able to work with (men).”