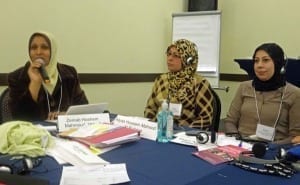 Francesca Ricciardone said one goal of the workshop is to avoid “exceptionalizing” the Middle East/North Africa (MENA) experience for women seeking to achieve power in times of political upheaval. The question we ask today, said Ricciardone, is “what role can unions play in creating more just societies and more equality in society?”

Zeinab Hashem Mahmoud Ahmed opened by noting the role of women and unions leading up to Egypt’s January 2011 uprising. Women played a major role in the 3,000 strikes by workers in the four years prior to the uprising, even though unions are made up of mostly men. There is no quota system to help women advance in Egyptian unions. Further, there are no child care facilities in workplaces and women don’t know their rights—they don’t know what the law says, so the only way they get those rights is through union membership. The January 2011 uprising called for equal job opportunities for men and women, and workers were pushing a law in the legislature that would permit creation of unions without the permission of the government.

She said “the Morsi regime was excluding women from political life,” even though “Islam itself calls for equality between men and women. But no one implements these laws.” Further, under Morsi, 151 workers were illegally fired in one year, she said. The year he was in office “was a tragic year for the working class. Many more suffered harassment” and much of the harassment was directed at unions, she said. Workers held rallies to demand work, and protests rose from 160 a month to more than 1,000 in six months. The 300 unions in eight regional federations of the EDLC “try to defend the rights of workers, especially workers who see their salaries are being slashed,” Ahmed said.

Alyaa Hussein Mahood Al-Rubaye began by noting that Iraqis “lived through very difficult times after the fall of Saddam Hussein—double jeopardy for rural women who were completely isolated.” Further, “We live in a tribal culture that’s totally misogynist,” she said, one based on “inherited customs.”

However, windows of opportunity began opening for women when the need to economically support their families grew. As a result, “work helped open the way for women to gain freedom. The whole issue of women started to became important after so many years of being invisible.” Still, society overall does not recognize women, even though after Saddam Hussein fell, the government and other entities began reaching out to women.

Ilham Abdulmaabood Majeed Al-Jasim continued Mahood’s discussion about the issues women face in Iraq by stating that “women can’t even go out in the streets without being harassed.” She cited the need for capacity building to increase women’s role in politics and the need for data to understand what women and men face in their daily lives. In short, “the advancement of women’s social status can only happen through training,” she said.

Touriya Lahrech built on Ricciardone’s call to expand the breadth of discussion by stating that “we in the Arab Spring call it a movement. In fact, it’s not even Arab because the area is multi-cultural and multi-lingual. We can’t call it purely Arab from a cultural perspective.”

Morocco has traditionally lacked independent trade unions, she said. Further, society traditionally has focused on “cultural values, male pride, rejecting what the woman has to say.” She described common caricatures of women as deceitful, and said to counter such stereotypes, women workers are looking to develop movies and other popular media to change the culture.

Achieving gender equality in unions means women must change union bylaws to include gender quotas for leadership positions because “there is a large gap between men and women in leadership.”

Lahrech, who is the coordinator of the CDT’s Women Department, said that the confederation has mandated that any local council that did not include a certain number of women could not vote as a member of the federation’s national council.

Francesca Ricciardone asked panelists to discuss how we can raise the issue of women’s rights.

Majeed Al-Jasim, who is president of the Telecommunications Workers Union in Iraq, said whatever the union undertakes “we always try to include women’s participation.” Yet, “the old mindset is not favorable to women’s participation.” Because women are shamed for going out in the street, women have very little visibility in mass protest rallies, she said.

Mahood Al-Rubaye discussed efforts by unions, with assistance from the Solidarity Center, to meet with government officials as they drafted new labor laws to ensure they comply with international labor standards. A “diversity of unions” have joined forces in this ongoing effort because of the Solidarity Center, she said.

In the audience, Chidi King from the ITUC’s Equality Department, described her experience while in Tunisia for International Women’s Day in March this year, and remarked on “their drive, their commitment, their activism.” Yet, “they are not getting the support they need from union structures.” Women need the space to self-organize. “If we are truly going to build a movement that is fully inclusive, women need to be able to organize among themselves,” she said.

Ahmed asked that the international community apply pressure on the government for example, by urging it to follow a law on union freedom that will allow women to organize. “So many people are outside any union structure,” she said. “The Muslim Brotherhood refused to enforce the law that would give back the rights to workers that have been stolen from them.”

Ricciardone asked panelists how they are regarded by society for doing this work.

Majeed Al-Jasim stated that “the lack of opportunity for women is one of the things that pushed women into union work.”

Ahmed said Egyptian “society is all about men. Tribal problems also exist, she said. “One tribe won’t be represented by another.” Women won’t run for political office because they face smear campaigns. “Most women are totally oblivious to their rights as workers,” she said, and her union is pushing for the government to educate women about their rights.

Lahrech said there is a “relationship between unions and women’s committees.” Her confederation held popular protests and rallies and joined with 650 organizations to take to the streets to protest religious extremists’ efforts to take away women’s rights.

Mahood pointed out that women in Kurdistan have a lot of rights. But because Baghdad is not safe, “we feel a lot of insecurity.” Despite the external challenges, Mahood said unions have had some successes, such as wage raises.

Ahmed remarked that after the revolution in Egypt, unions established women’s committees and unions provide much assistance around such issues as sexual harassment.

(Amnah Mafarjah, president of the Palestine General Federation of Trade Unions  was unable to attend the conference. Read her presentation, “Toward Promoting Equality and Social Protection for Working Women in the Agriculture and Public Services Sectors in Palestine.”)