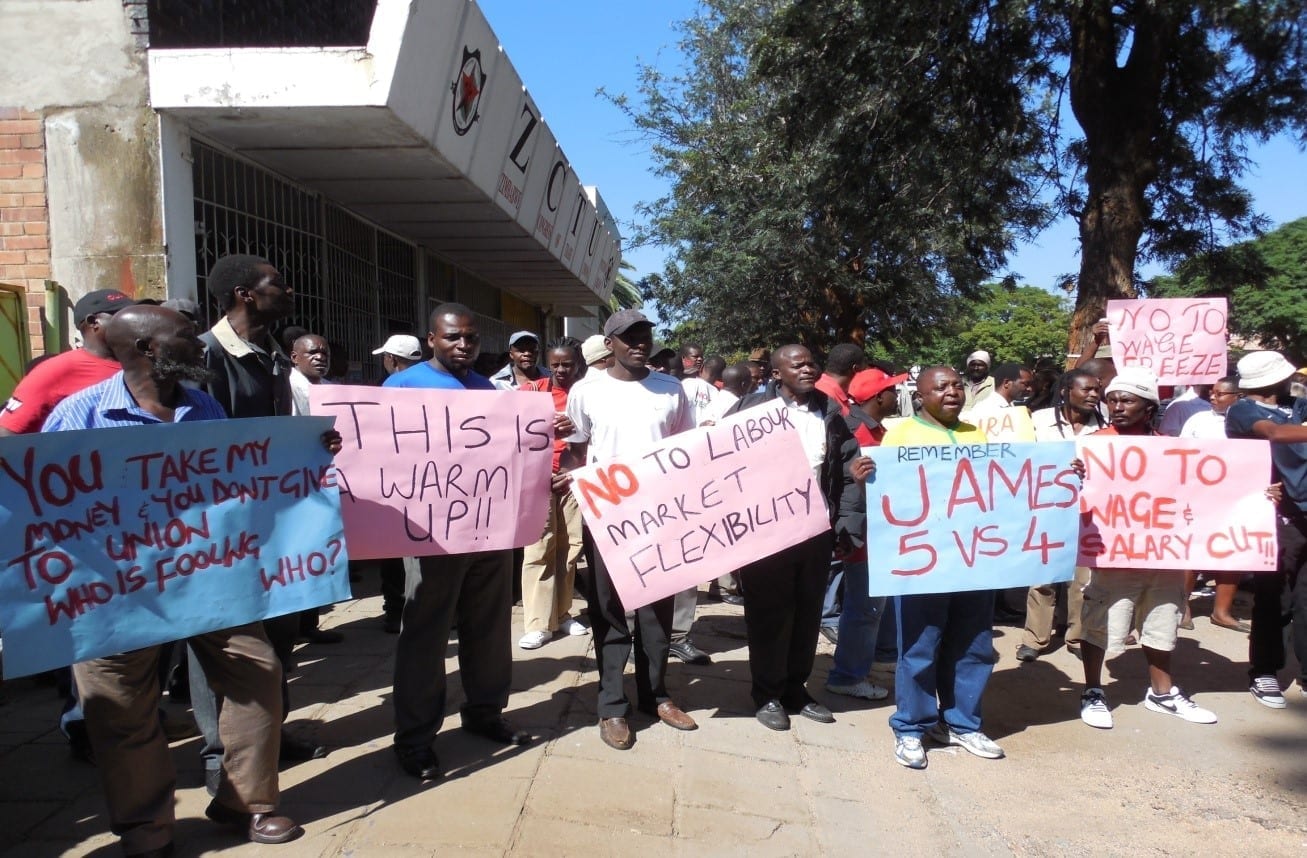 Fed up with unpaid wages, salaries that are below the poverty line, few jobs available in the formal sector and a proposed wage freeze, Zimbabwe workers took to the streets in six cities Saturday to demand workers be paid and to petition the government to not arbitrarily change the labor law to empower employers to fire workers.

Carrying signs reading “Worker rights are human rights,” and “This year, we are not backing down,” workers presented government officials with a petition demanding officials honor their pledge to create 2 million jobs and rethink the introduction of so-called labor market flexibility, in which the brunt of economic reform falls on workers. (Read the full petition.)

“Senior government officials, including the minister of finance, want to turn the worker into a form of cheap labor,” Zimbabwe Congress of Trade Unions (ZCTU) President George Nkiwane said at the rally. “While it is the ordinary worker that is being made to suffer, the government is not taking any meaningful action on chief executives who are bleeding the economy by paying themselves huge salaries and perks.”

Wages average less than $250 a month—for the 30 percent of the population working in the formal economy—while the cost of living is as high as in New York City. Some 72 percent of the population lived below the poverty line in 2013. Increasing numbers of Zimbabweans are forced to seek a living in informal economy jobs like street vending, in which they have no income security and few, if any, social benefits like health care.

Women are disproportionately represented in poor-paying informal economy jobs, and young workers in urban areas also lack jobs that pay a living wage, the ZCTU petition noted. Employers also increasingly subcontract dangerous jobs, and so avoid paying compensation to workers injured or made ill while on the job, the petition stated. 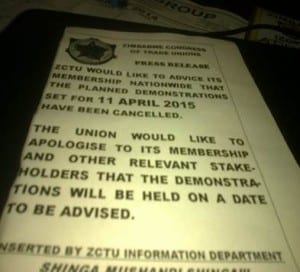 Fake press releases and pamphlets were distributed in advance of the rally, falsely stating the rallies had been cancelled. Credit: ZCTU

Protestors turned out in Bulawayo, Chinhoyi, Gweru, Harare, Masvingo and Mutare despite a campaign to fool workers into thinking the rally had been cancelled. Fake press releases and pamphlets, purportedly from ZCTU, were distributed in several cities in advance of the rally, telling workers it had been canceled.

The march took place in an increasingly threatening environment for activists. Last month, Itai Dzamara, a leading pro-democracy advocate, was abducted. He remains missing, and leading civil society organizations—including the ZCTU—are calling on the government to ascertain his whereabouts and prosecute his abductors.

Police in the cities of Bulawayo, Mutare and Masvingo initially refused to grant permission for the demonstrations, but reversed their decisions after the Harare police agreed to allow the demonstration there, according to the International Trade Union Confederation (ITUC).