Honduran Unions to Be Honored at 20th Anniversary Event 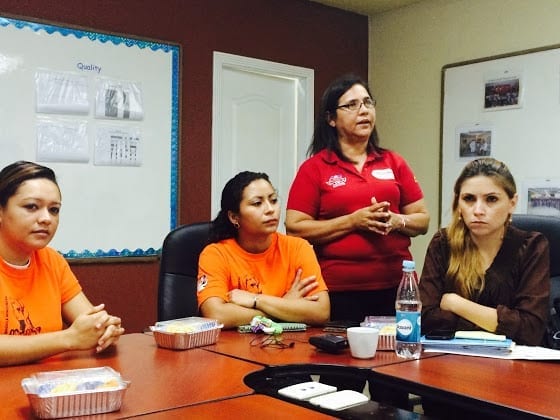 In Honduras, union leaders are on their way to successfully negotiating eight collective bargaining agreements covering 21,000 garment workers who have joined unions in the past few years. Contracts negotiated so far include 23 percent wage increases, free transportation to and from work, free lunch, additional severance pay for workers recovering from ergonomic-related illnesses, and educational funds for workers and their children.

Five of those agreements will be first-ever pacts for 17,350 workers, says Evangelina Argüeta Chinchilla, coordinator of organizing maquila workers in the northern Choloma region for the General Workers Central (CGT) union confederation.

Find out how you can take part in the Solidarity Center 20th Anniversary celebration!

Argüeta Chinchilla, whose efforts to improve factory workplaces and whose training among women garment workers is enabling them to take leading roles in their unions and communities, will be honored along with the Honduran union movement November 15 at the Solidarity Center 20th Anniversary celebration in Washington, D.C.

The evening event features AFL-CIO Secretary-Treasurer Liz Shuler and also will honor U.S. Sen. Sherrod Brown for his leadership to protect worker rights and the brave Colombian union and community activists for their frontline-efforts to achieve social justice in their country. And special guest U.S. Rep. Karen Bass will deliver remarks. (There’s still time to sponsor the event or buy tickets to attend!)

The day begins with a launch of the Solidarity Center-support book, Informal Workers and Collective Action: A Global Perspective, and panel discussions featuring U.S. Rep. Pramila Jayapal and international worker rights activists. (Find out more about the free book event and RSVP here.)

Honduran Unions ‘Persevere on Behalf of Workers and Their Families’

In a country where in recent years union leaders have been harassed, attacked and even murdered, and where employers utilize hardball tactics to prevent workers from forming unions and bargaining contracts, the stunning success of the garment workers in achieving fundamental workplace rights is a “testament to the determination of the Honduran union movement to persevere on behalf of workers and their families,”  says Solidarity Center Executive Director Shawna Bader-Blau. “Together, they are helping to ensure that workers have living wages, just and fair workplaces and the opportunity to improve the future of their children.”

Argüeta Chinchilla is emblematic of these dedicated activists. She began work in a maquila at age 15, where she toiled for nine years and was a founder of the union at her factory before becoming a full-time organizer for the CGT. With Argueta’s leadership, Honduran garment-sector unions have negotiated historic worker rights agreements with two major U.S. clothing brands, Fruit of the Loom (2009) and Nike (2010), that laid the groundwork for successive organizing and collective bargaining achievements.

She and other women unionists hold leadership trainings with assistance from women’s rights organizations and the Solidarity Center. Argüeta Chinchilla hopes to see women “exercising power proportional to the numbers we represent in the world, in the labor movement.”

Empowered women now ensure their concerns are reflected in bargaining agreements. Some of the contracts garment workers have negotiated so far grant women who have just given birth additional paid leave beyond the 12-week maternity leave they receive under Honduran law.

“This is important, because a lot of times women workers must resign because they don’t have anyone to take care of their baby, especially in the early weeks, and this will help them get through that period,” says Argüeta Chinchilla, speaking through a translator.

Expanding Democracy Through the Freedom to Form Unions

International solidarity with Honduran workers has been key to furthering their efforts to achieve decent jobs. In November 2009, Russell Athletic agreed to rehire 1,200 workers in Honduras who lost their jobs when the company closed the factory in an attempt to bust the union, after the union—with support from the Solidarity Center and the United Students Against Sweatshops—convinced 110 U.S. universities to cut their apparel contracts with Russell.

Since then, says Argüeta Chinchilla, “it is very evident that significant protections have been made—workers are more educated about their rights, there is more respect for freedom of association and collective bargaining, and improvements such as health and safety for workers.

“There is always the fear of losing your job, but less now than what happened in past.”

Earlier this year, a four-year campaign by Honduran labor unions to improve workplaces and strengthen the rights of workers culminated with the Honduran National Congress approving a new labor inspection law. The law promotes, monitors and is designed to ensure that workplace standards, safety and health provisions, and social security requirements are upheld. It includes financial penalties for violations of worker rights, including the right to form unions.

Argüeta Chinchilla knows that such success begins through empowering workers, especially women workers, to take active roles in their unions.

“The internal democracy of unions has improved,” says Argüeta Chinchilla. “Many more women are active in union leadership, and this has translated into civil society: Workers are more participative in democracy and government and the country in general.”