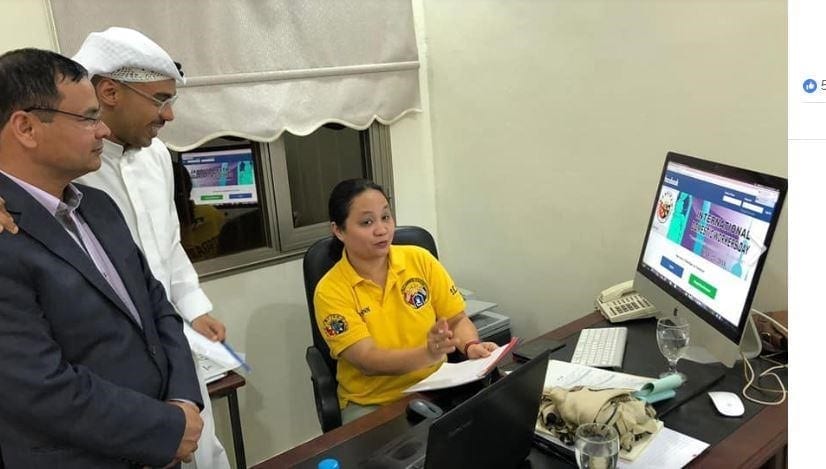 Millions of migrant workers are trapped in conditions of forced labor and human trafficking around the world, in part as a result of being lied to by labor brokers about the wages and working conditions they should expect. Of the estimated 150 million migrant workers globally, some 67 million labor as domestic workers—83 percent of whom are women—often in isolation and at risk of exploitation and abuse. An International Labor Organization global standard—Convention189 on Domestic Workers—was adopted in June 2011 to protect domestic worker rights.

Domestic worker volunteers from Sandigan-Kuwait, a domestic worker rights organization for Filipino workers, and GEFONT Support Group-Kuwait, an organization for Nepali workers in Kuwait associated with the General Federation of Nepali Trade Unions (GEFONT), will staff the office, encouraging workers to drop in or call to report abuse and request legal assistance from KTUF.

This is the first time that migrant organization volunteers have been invited to participate in the operations of KTUF’s migrant worker office. With support from the Solidarity Center, KTUF will be able to increase its assistance with migrant worker-initiated legal cases.

“The migrant workers’ office opens its doors to all representatives of migrant worker communities, in all categories, to receive complaints,” says KTUF Assistant Secretary General Obeid Menahi Al Ajmi. The federation, he continues, will devote all its resources and tools to support migrant workers, in coordination with the country’s domestic worker department.

The project can be “the avenue on helping each other for the betterment of everyone,” says Sandigan-Kuwait, volunteer organizer, Chito Neri.

Kuwait has been recognized for some important progress on migrant worker issues. A new domestic worker law adopted in 2015, the first in the Gulf Cooperation Council (GCC) region, brought the country closer to compliance with internationally recognized labor standards and included a minimum wage and a maximum 12-hour workday, with one day off per week, for migrant workers such as maids, babysitters, cooks and drivers. Kuwait and the Philippines last year signed a new deal that prohibits common employment practices for migrant workers in the Gulf region, including confiscation of passports by employers.

However, migrant workers remain vulnerable to abuse. Changes to employment conditions may be rejected by private employers, who have a financial incentive for maintaining the status quo. A 2017 International Labor Organization study revealed that a significant percentage of employers in Kuwait took steps to prevent their domestic worker from leaving their employ by denying her a day off, refusing to allow her to leave the house unaccompanied or confiscating her passport—all indicators of forced labor. Domestic workers in Kuwait are not yet allowed to join unions to protect their rights.