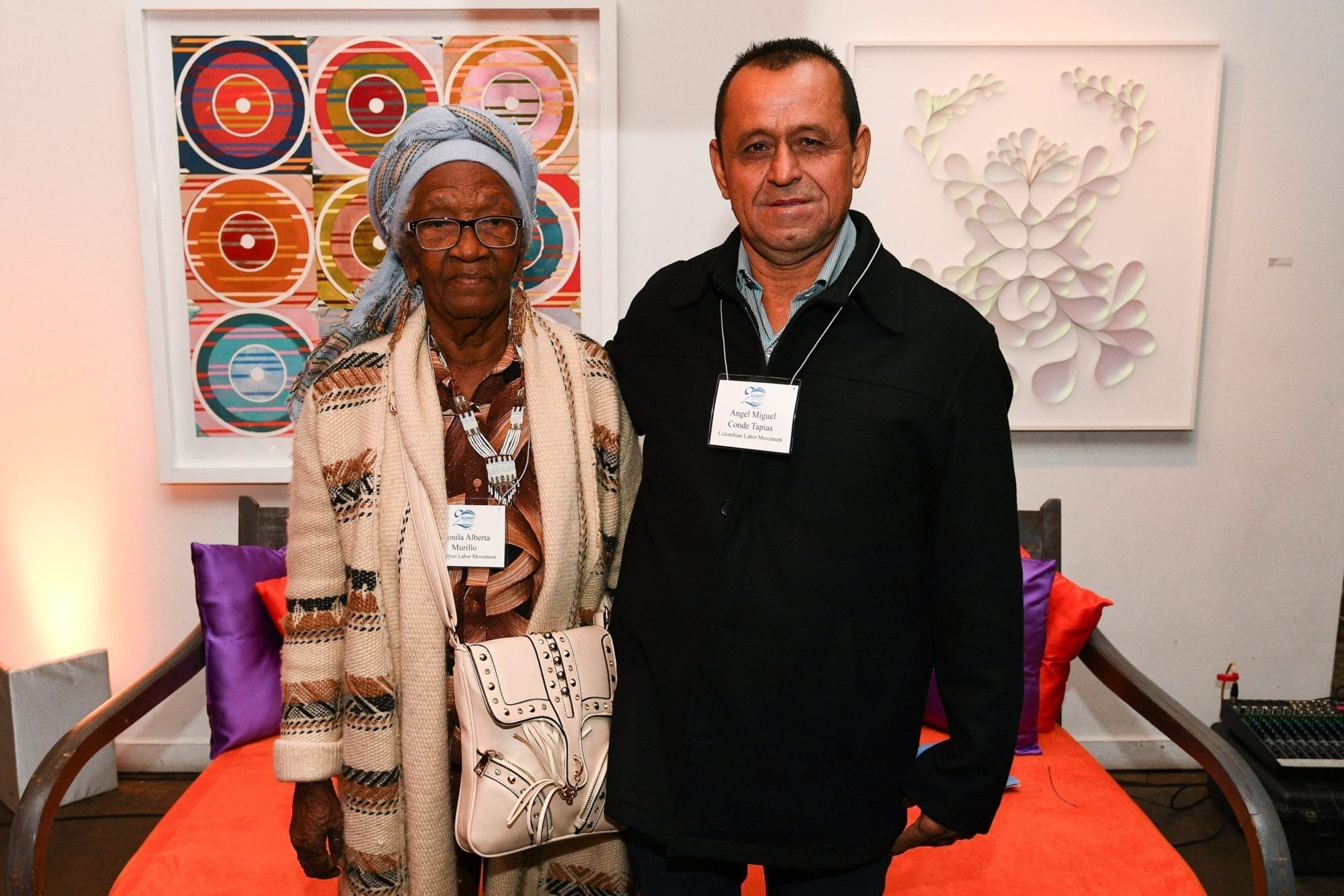 Leonila Murillo, a decades-long leader in Buenaventura, Colombia, and Angel Miguel Conde Tapia, a Colombian palm oil worker and union vice president are among the extraordinary leaders and activists who will be honored for their dedication to improving the lives of workers and their communities during the Solidarity Center 20th Anniversary celebration in Washington, D.C., tomorrow.

The evening event features AFL-CIO Secretary-Treasurer Liz Shuler and also will honor U.S. Sen. Sherrod Brown for his leadership to protect worker rights, and the Honduran labor movement for its dedication to achieving rights for workers in difficult and sometimes deadly conditions. Special guest U.S. Rep. Karen Bass will deliver remarks. (There’s still time to sponsor the event or buy tickets to attend!)

The day begins with a launch of the Solidarity Center-supported book, Informal Workers and Collective Action: A Global Perspective, and panel discussions featuring U.S. Rep. Pramila Jayapal and international worker rights activists. (Find out more about the free book event and RSVP here.)

On the Frontlines of Social Justice Unionism

Murillo, 81, has long been on frontlines to achieve social justice in her community. Most recently the mother of six children, 13 grandchildren and 14 great-grandchildren was among tens of thousands of peaceful protesters in Buenaventura who took to the streets for 22 days in May demanding peace and dignity after years of neglect by leaders in Bogota, the capital. Many of the port city’s 400,000 predominately Afro-Colombian inhabitants live in abject poverty without access to proper hospitals, schools, roads and other basic services.

On June 6, the government agreed to invest more than $500 million in the long-neglected city over the next decade. Buenaventura’s thriving port accounts for 60 percent of the country’s maritime trade and in 2014, generated $2 billion in tax revenue. Only 3 percent of that revenue is reinvested in the city, where residents are primarily Afro-Colombians.

Murillo, who leads 1,000 women in the organization Women in Black of the Pacific Route, and served as president of her neighborhood district’s Council of Community Action, also has worked for 29 years as a child caregiver, known as “community mother.” She was among leaders of the struggle by community mothers to gain pension benefits, going on strike in 2013 and winning promises from the government to give the women, who work as “independent contractors” the same benefits as directly employed caregivers. So far, the community mothers have seen no pension benefits.

“That’s why I’m here [in the United States]—to denounce that, to say that there are women who are dying and never getting their pensions,” Murillo says, speaking through a translator.

As a palm oil worker in Colombia, Conde Tapia, hacks through the fruit with a machete, cleans branches and performs field maintenance on one of the country’s large agricultural plantations. A 29-year union member and now vice president of the palm oil union SINTRAINAGRO, he has sacrificed much to improve working conditions. Conde Tapia says he nearly lost his life when a gunman targeted him for his union work. Luckily, the gun pointed at him did not fire. But Conde Tapia has sent some of his children out of the area for their safety. Other union activists have had similar experiences.

In recognizing the incredible sacrifices of Murillo and Conde Tapia, the Solidarity Center honors the struggles of all Colombians in Buenaventura and across palm oil plantations who strive to improve their lives and their families’ future.